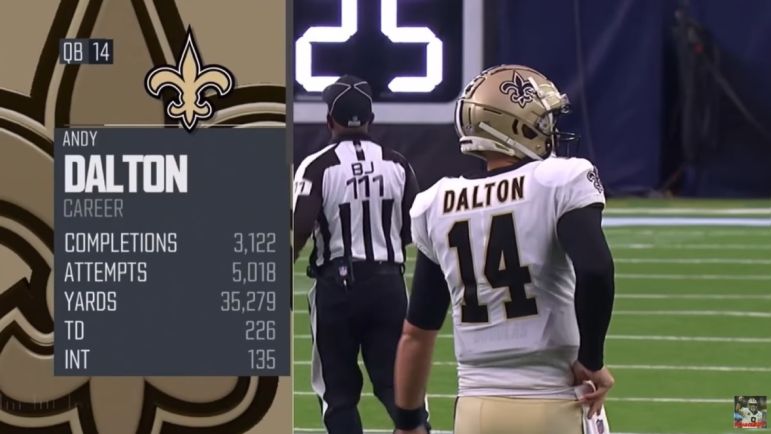 The Pittsburgh Steelers enter Week 10 of the season with a record of two and six, as the team had a hard time finding any traction in the first half of the year. Coming off the bye week, the Steelers are set to host the struggling New Orleans Saints, who have a losing record themselves with just three wins and six losses.

Dalton has had an up and down year for the Saints, as he took over for injured starter Jameis Winston earlier in the season. Winston is now healthy, but it seems the Saints will be going with Dalton going forward. New Orleans is playing in one of the weakest divisions in the NFL this season, so even with a rough start in the first nine games, the Saints still have a decent shot at winning the NFC South.

Coach Mike Tomlin was asked about Andy Dalton earlier today on The Mike Tomlin Show, broadcasted via the Steelers YouTube channel and offered lots of praise for him.

“He’s still Andy, in that he’s a fluid decision maker. He makes good decisions; he takes care of the ball and that’s probably one of the reasons why he’s in there. They turn the ball over some, and that’s been challenging for them in engineering victory,” Tomlin continued, “Andy has always been really steady, he has a strong above the neck game, he doesn’t really make mistakes or get you beat generally.”

Coach Tomlin hit it right on the nose, Andy Dalton takes care of the football. Outside of a rough three-interception performance against Arizona in Week 7, he has thrown just two INTs in the five other games he has appeared in this year. He looks to be the best bet for keeping the Saints into these games down the stretch, as his competition Jameis Winston has always had problems with turning the football over.

“He has a familiarity with us and I’m sure that’s going to be an asset to him, but we also have a familiarity with him,” Tomlin said when asked about facing Dalton over the years. “We’ll get an opportunity to refamiliarize ourselves and play the strategic component of the game.”

While he is correct on Dalton and the Steelers being accustomed to one another, Pittsburgh always seemed to have an upper hand in the matchups. Dalton only won just three times in 16 matchups during his time with the Cincinnati Bengals, while throwing 14 INTs. It was a disaster for him almost every time the two faced off. You could argue those Bengal teams weren’t the best all around, but it should be noted about the history he has with the Steelers.

Pittsburgh must try and force Dalton into making some poor decisions this week if they want to get in the win column once again. They do get some much needed help in that regard, as reigning Defensive Player of the Year TJ Watt is set to return. He is another familiar face to Dalton, and not one that I think he wanted to see.