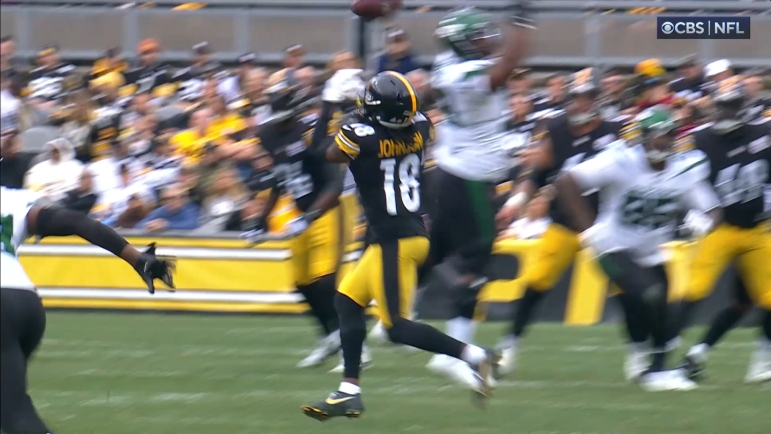 One of the most loaded topics of conversation when it comes to the Pittsburgh Steelers offense is the subject of dropped balls. A drop is an inherently subjective statistic and thus for that reasons will probably never been made an ‘official’ one, but there are numerous outlets who track them, and at least one would figure that each outlet would be consistently subjective in its own way.

The Steelers have a reputation among their own fans for being poor with regard to dropping balls, so I wanted to know what some of these different outlets say about it, spurred on by a Tweet from The Athletic beat writer Greg Auman, who provided data from Fox Sports on drops.

He posted on Twitter that the Steelers have the fifth-best drop rate in the league based on Fox Sports’ numbers. By my calculations, working backward, I determined that Fox Sports must have Pittsburgh down for 10 total drops on the season, working from 295 pass attempts.

That translates to a drop rate of 3.39 percent, which Auman calculated as being among the five best in the league, behind only the Los Angeles Rams (2.44), the Indianapolis Colts (2.58), the Atlanta Falcons (2.99), and the New England Patriots (3.38).

Here are the NFL teams with the lowest drop rates:

Okay. That’s all well and good, sure, but that’s only one outlet. What do other outlets say? Fortunately we do have those numbers as well. According to Pro Football Focus’ data tracking, the Steelers have been responsible for 11 drops this season, one more than Fox Sports has them down for. Pro Football Reference also has them down for 11.

So, that’s a little bit more, but only off by one. We’re pretty much in the ballpark with three different outlets being very close to being on the same page. 11 drops on 295 pass attempts would be 3.73 percent. Working from Auman’s data relative to Fox Sports’ numbers, that would put the Steelers in ninth place rather than fifth, but that’s still good, and also an uneven comparison.

The other outlets don’t easily parse drop numbers by team on a large scale, so we’d have to take them one by one. I’m not going to do the whole league, but looking at the top 10 teams in drop rate by Fox Sports’ numbers, we get the following:

Okay, so what does this tell us? What do we learn? For one thing, it’s quite apparent that Pro Football Focus is a more conservative grader of drops than is Pro Football Reference. Only in one instance does the former have a team credited with more drops than the latter, while the opposite is true 8 out of 10 times, with the Steelers being the only team on which they agree.

That last fact is interesting as well. Perhaps it suggests that there is less ambiguity about the drops the Steelers have had on offense in not only assigning blame but also assessing the responsibility of the receiver to have successfully fielded the ball.

Pittsburgh still finishes in fifth place by PFF’s numbers, based on the top 10 from Fox Sports that Auman provided (which admittedly was a bit old, from the 8th, and perhaps not fully updated with the weeks’ results by then). They don’t do as well for PFF, finishing eighth.

Unfortunately, they don’t even agree on whom to blame. Both attribute three drops to Diontae Johnson. PFR assigns three to Pat Freiermuth, but PFF only two. PFR has Jaylen Warren down for two drops, PFF one. PFF has George Pickens and Najee Harris both down for two drops, PFR one apiece. They both charge Chase Claypool with one drop.