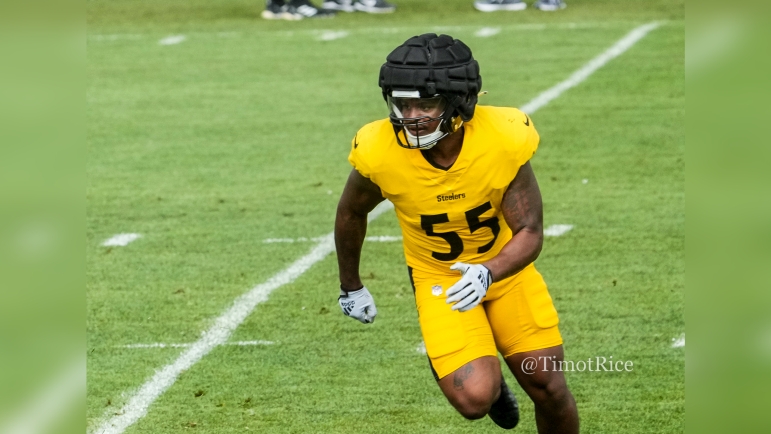 This morning, ESPN released their weekly power rankings and added a bit of a twist to it. They decided to revisit their preseason hot seat list for each team and see if that player or coach’s seat was still hot. For the Pittsburgh Steelers, ranked 27th in these latest power rankings, their preseason player on the hot seat was inside linebacker Devin Bush.

Steelers beat reporter Brooke Pryor have his seat a “lukewarm” rating and had this to say for why,

“To be clear, this isn’t a referendum on Bush’s performance this season” Pryor wrote. “The Steelers’ 2019 first-round pick has played pretty well this season, racking up 47 combined tackles and 3.5 stuffs. Bush responded well to Brian Flores’ addition to the coaching staff, and head coach Mike Tomlin is pleased with Bush’s performance so far, saying that he was starting to perform to his pre-ACL tear level.”

Pryor is right in that Bush has played well this season, well at least when compared to last season. Last year, Bush only had 70 tackles and as long as he stays healthy this year he should surpass that. Bush is averaging a little over five tackles a game this year (5.2 to be exact), and if he plays the remaining eight games of the season he should finish the season with 89 tackles (88.7 to be exact).

So why is his seat lukewarm? Well, it is honestly just due to where he was drafted and his draft expectations. The Steelers traded up for Bush and took him with the tenth overall selection in the 2019 draft. He looked great his first year, and his sophomore year was off to a good start too until he tore his ACL in week five against the Cleveland Browns. Last year, Bush did not look fully confident and looked like his athleticism was not fully there. In addition, the Steelers defensive line was banged up which allowed the smaller and still recovering Bush to get easily swallowed up by offensive lineman hitting the second level.

This year has certainly been an improvement for Bush, and he has played himself into making new general manager Omar Khan have to consider giving him his fifth year option. Playing with Myles Jack besides him has certainly helped Bush as well as Jack has been a good mentor for Bush.

Bush in a way is at a disadvantage due to his draft position. Benign the tenth overall pick carries weight, and he certainly has not played up to what that high of pick should be playing. However, at the same time, the middle linebacker position rarely offers huge impact plays that some may expect from a top ten draft pick. However, that position is still very important, as the lack of quality play last year from the inside linebacker position showed its importance last season.

In my opinion, Bush is off the hot seat completely at this point. He’s by no means an elite player, but this year he is not a liability like he was last season. With the way he has played this year, it would be hard to get upset if the Steelers decide to bring him back next season.