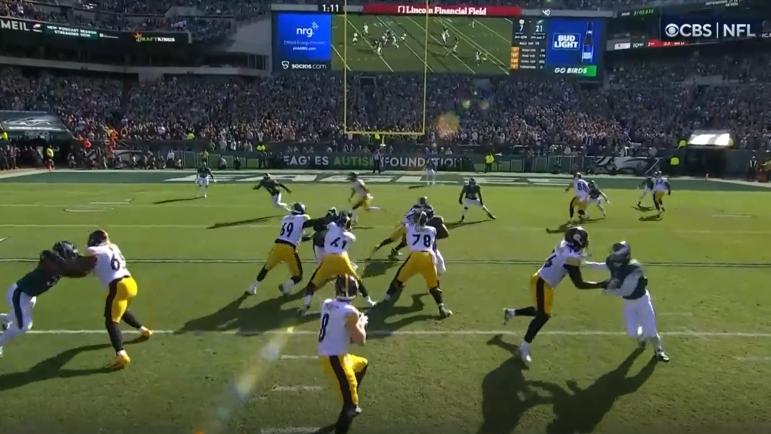 During the bye week, I wanted to look at a different angle than my weekly Steelers Quarterback Passing Locations articles, and see how Kenny Pickett has fared in some game situations. Thanks to Thomas Mock for his great article that helped me learn much of what I’m using today. Couple notes before we jump in. All yardage referenced are air yards from the line of scrimmage and bats at the line of scrimmage, spikes, and clear throwaways removed.

To start, I wanted to see what Pickett’s throw splits looked like by half, with the second half chart including overtime: 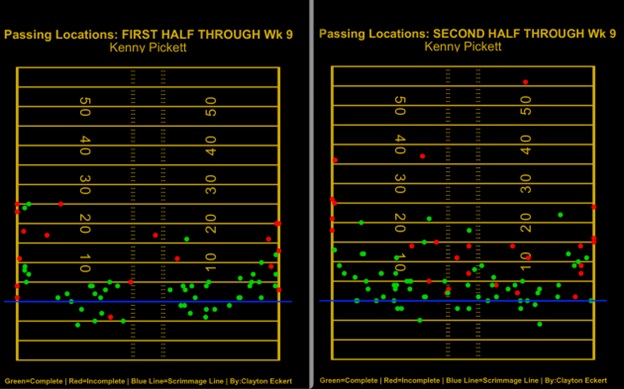 Right away we can see game situation has played a big factor in Pickett’s pass areas, with a much more conservative chart in the first half compared to the second, when the Steelers have had to play catch up far too often. Amazingly, only 16 passes past ten yards in the first half, with only four of those being completed (25%). Another big takeaway is the utter avoidance of the middle of the field in the first half, with only two passes on or inside the hashes, both incompletions. In comparison, 9/14 (64.3%) on or between the hashes in the second half, and really hoping Pittsburgh will look to this area of the field more early in games. Pickett is 11/29 (37.9%) past ten yards in the second half, but that also includes five of his eight interceptions to date. Another interception that came in the second half was near the line of scrimmage, so six of his eight interceptions have come in the second half, and his two touchdowns came in the first. This further highlights the poor results the team has had when trailing, and the need to remain close on the scoreboard to hopefully open things up with more success throughout games for Pickett and the passing offense moving forward.

The other situation I wanted to look at is by down, with the first chart being early downs (first and second downs) and the other late downs (third and fourth downs): 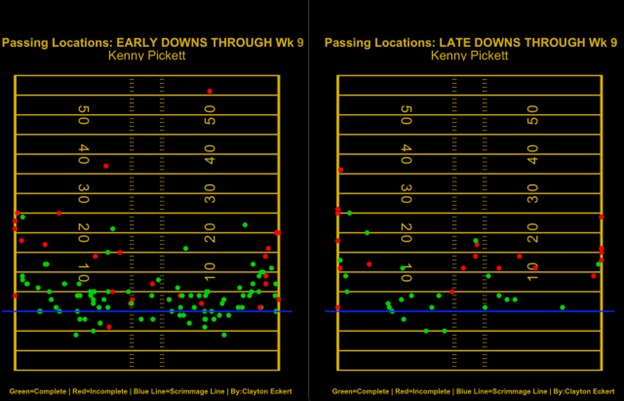 A few things jump out when comparing the charts. Pickett has lacked success on the sidelines in general, but is only 2/12 (16.7%) on late downs from the yard marks to the sidelines. We can also see no passes between the hashes past ten yards on early downs, something I hope the team will start incorporating and interested to watch for moving forward. Looking at on-between the number throws past ten yards, Pickett is 3/7 (42.9%) on early downs, compared to 2/8 (25%) on late downs, and the pass distances severely lacking on drive extending downs. On late downs past ten yards overall, Pickett is only 6/22 (27.3%) with two interceptions and no touchdowns, compared to 9/23 on early downs (39.1%) but five interceptions and also no touchdowns. The team has thrown short and relied on yards after catch (unsuccessfully) overall this season, but actually at a lower rate than I would have guessed on money downs. 15 of 43 (34.9%) late down passes were thrown short of the sticks, but what likely makes it feel more frequent is the lack of success, with only three of those plays going for a conversion (20%). On late down passes overall, Pickett has converted 15/43 into first downs as well (34.9%).

What are your thoughts on the situational data? Do you think Pickett and the passing offense can improve in some of the highlighted areas? Thanks for reading and let me know your thoughts in the comments!