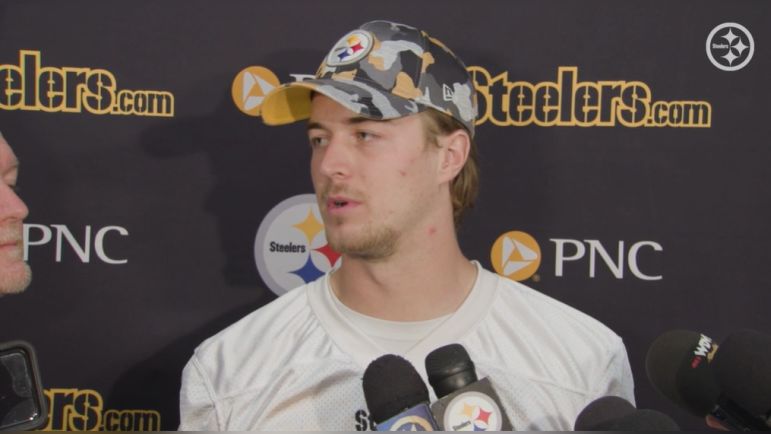 The defense for the Pittsburgh Steelers is getting Defensive Player of the Year T.J. Watt to start the second half of the season. They will also see third safety Damontae Kazee make his 2022 debut to kick things off. The offense, on the flip side, had a starting wide receiver traded away over the bye week. And they were already the least efficient scoring offense in the NFL.

What good has the break done to improve their chances of success? That’s the biggest question looming over these final nine games. While many fans would rather see the team tank, the reality is that a lack of visible improvement from this unit, especially from rookie quarterback Kenny Pickett, would be a very bad sign for the near future. So, again, what of it coming out of the bye?

“We’ve got a pretty good groove. Everyone seems to have really good attitudes”, Pickett told reporters about the mood in the locker room back inside the UPMC Rooney Sports Complex after the break via the team’s website. “A little extra pep in the step, I guess you could say. Guys got some extra sleep and did some recovery things, so it was good”.

As much as many may not want to hear this, many players have spoken in recent days about prioritizing time away and ‘resetting’ over the bye, almost like a spiritual cleanser to relieve themselves of the stresses of the first two months of the year.

Not that it was all rest and relaxation. Pickett did talk about how they worked in the early portions of last week on cleaning up fundamentals before turning their attention to the New Orleans Saints, their upcoming opponents. But players used their free time to recharge, and the sense is that it’s been a good thing for the group.

“I think so, absolutely”, the quarterback said of whether or not that time off just from a mental standpoint in the locker room was valuable. “We’ve been going at it for a while, going back to camp, so it was good I think to get a break and get away. Everyone came back pretty refreshed”.

Everyone except for Chase Claypool, of course, who was traded to the Chicago Bears during the bye and who has already made his NFC North debut. The Steelers move on without him, at this point in unknown combinations, or at least the proportions of those combinations being unknown.

We know who the players are—Steven Sims primarily as the third receiver, with more playing time for reserve tight ends and running backs—but how much adjustment there will be away from 11 personnel, not even the coaching staff probably knows right now. Not that fans have much confidence in the offensive coaches knowing all that much in general.