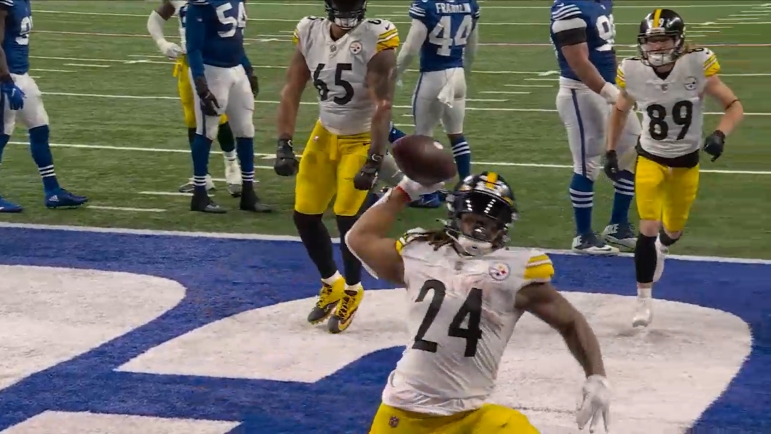 The 3-7 Pittsburgh Steelers traveled to Indianapolis for a matchup with the 4-6-1 Indianapolis Colts at Lucas Oil Stadium on Monday Night, and the Steelers were able to keep their win streak against the Colts alive, winning their 8th straight game against the team with a BLANK win on the road.

Pittsburgh opened with the football, and on 2nd down WR Diontae Johnson picked up a first down on an 11-yard reception from QB Kenny Pickett, and two plays later Pickett connected with Johnson again for another first down. After another first down on 1st and 10, LT Dan Moore Jr. was flagged for holding, and the Steelers faced a 1st and 20. Two plays later, it was 3rd and 2 after an eight-yard scramble by Pickett and 10-yard completion to TE Pat Freiermuth. On 3rd down, Pickett’s pass was high and WR Steven Sims couldn’t corral it, so the Steelers had to settle for a field goal. K Matthew Wright made a 45-yard field goal, and Pittsburgh took a 3-0 lead with 9:27 left in the first quarter.

The Colts had a nice kick return, as WR Isaiah Rodgers returned Wright’s kickoff 33 yards to their own 34. After a near-interception by CB Levi Wallace on first down, CB James Pierre picked off QB Matt Ryan on 2nd down and the Steelers had prime starting field position at their own 38.

Pittsburgh threw it short to WR Cody White on first down for a gain of two and then ran it with Harris on 2nd down, so they quickly faced 3rd and 5 from the Indianapolis 33-yard line. Pickett scrambled for a first down on 3rd, and the Steelers had a new set of downs just outside the red zone. Pickett was sacked on first down, and on 2nd and 15, Harris was only able to pick up three yards. DE Yannick Ngakoue, who got the sack on first down, came in untouched and sacked Pickett for a loss of 12 on 3rd down and they got knocked out of field goal range and had to punt. P Pressley Harvin III’s punt went into the endzone for a touchback and the Colts would start at their own 20.

The Colts would go three-and-out after S Terrell Edmunds came in on a blitz and sacked Ryan. P Matt Haack’s 59-yard punt was returned by Sims for 18 yards to the Pittsburgh 39. On 2nd and 7, Pickett went to WR George Pickens, and his first catch of the game was good for a first down and a gain of 9. Two plays later, RB Anthony McFarland Jr. took a handoff 14 yards for a first down.

Pittsburgh went to McFarland on back-to-back plays with much less success, as he got stuffed at the line of scrimmage on a run and lost two on a reception in the flat. After a four-yard reception by Pickett, the Steelers sent out Wright for a 52-yard try, and he doinked it in off the right goal post to give Pittsburgh a 6-0 lead with 14:08 left in the 2nd quarter.

The Colts went three-and-out again, and the Steelers would start their fourth drive on their own 21. On first down, Pickens made a 35-yard catch in single coverage and the Steelers were in business at the Indianapolis 44. On 3rd and 2 two plays later, RB Benny Snell Jr. got just enough for a first down. A 12-yard gain on 2nd and 5 by Freiermuth gave the Steelers another new set of downs, and on 2nd and 11 two plays later, Pickett gained nine yards on a QB draw, and it was McFarland on 3rd and 2 who gained the first down to set up 1st and Goal. Harris ran for a six-yard touchdown on the next play, and Wright’s extra-point put the Steelers up 13-0.

RB Jonathan Taylor got the Colts first first down of the game on their next drive, and a nine-yard reception by Taylor and 10-yard reception by WR Michael Pittman Jr. later in the drive moved the Colts into Pittsburgh territory, where they ended the drive with a 51-yard Chase McLaughlin field goal to cut the Steelers lead to 13-3 with 3:48 left in the first half.

The Steelers next drive started on their 25 after a touchback, and a slip screen to RB Anthony McFarland went for 12 yards and a first down on the opening play of the drive. A nine-yard bullet to Johnson was followed two plays later by a 16-yard run by Snell, and a Pickett scramble gave the Steelers another first down a few plays later. A completion to Johnson on 2nd and 8 put Pittsburgh in a 1st and Goal situation, but they couldn’t punch it in and settled for a field goal to go up 16-3 with under two minutes to go in the first half.

The Colts drove down the field with just 48 seconds left in the half, connecting on some short passes to set up a 58-yard Chase McLaughlin field goal attempt. DL Isaiahh Loudermilk blocked the attempt though, and the Steelers went into the half up 16-3.

After two straight weeks of poor kick coverage, the Steelers finally got burned with CB Dallis Flowers taking Wright’s opening second-half kickoff 89 yards to the Pittsburgh 19. On the fourth play of the drive, Taylor punched in a two-yard touchdown and the Steelers’ lead was quickly cut to 16-10 with 13:04 left in the third quarter.

Pittsburgh went three-and-out after a run to McFarland out of shotgun on 3rd and 1 was short of the first down. Harvin’s punt went 54 yards to the Indianapolis 12 which is where the Colts would start their next drive.

Indianapolis cruised on their first few plays of the drive, gaining 8, 5, 14 and 13 yards respectively on their first four plays. On 3rd and 1 from the Pittsburgh 35, the Colts went to Taylor who was stuffed for no gain, but the Colts kept their offense on the field on 4th and 1. Ryan went over the top for a first down, and the Colts had a new set of downs. Another first down on a pass to TE Mo Alie-Cox moved Indianapolis to the Pittsburgh 22, but the Colts settled for a field goal after a 3rd and 7 pass to TE Jelani Woods was short of the sticks. However, CB Cam Sutton jumped offsides on the field goal attempt, and the Colts got a new set of downs.

On 3rd and Goal, a defensive pass interference call against S Minkah Fitzpatrick set the Colts up with the ball at the Pittsburgh one-yard line. However, Matt Ryan fumbled the handoff on the transfer after Taylor closed down on the ball too soon, and DE Chris Wormley recovered for the Steelers.

An eight-yard gain by Snell on first down was followed by a zero-yard gain by him on second down. On 3rd and 2, Pickett’s pass was dropped by Pickens and the Steelers punted after a second consecutive three-and-out. Harvin’s punt wasn’t a good one, going just 40 yards so the Colts would open up their next drive from their own 45.

The Colts first play was a 16-yard completion to Woods, which he fumbled out of bounds at the end of the play. On 2nd and 10 later in the drive, Ryan went back to Woods and he had an explosive 28-yard reception to get the Colts inside the 10. On 2nd and Goal, Ryan hit Pittman Jr. for a six-yard touchdown, and McLaughlin’s extra point put the Colts up 17-16 with 16 seconds left.

The Steelers avoided another three-and-out with a 28-yard completion to Pickens and then Colts’ LB E.J. Speed was flagged for roughing the passer, which added another 15 yards to the end of the play for Pittsburgh. That was followed by a nine-yard gain by WR Gunner Olszewski on an end-around and a 13-yard gain by Snell to get Pittsburgh to the Indianapolis 24. Then, the Steelers went to the Matt Canada-favorite tight end screen to Zach Gentry, but it was sniffed out by CB Kenny Moore for a four-yard loss. On 3rd and 6 after a completion to Johnson, Pickett went to Freiermuth for a first down and gain of 17 down to the Colts’ three-yard line.

On 3rd and Goal, the Steelers turned to Snell, and he punched it in to give them a 22-17 lead. Leading by five, Pittsburgh kept their offense on the field to go for two, and Pickett threw a dart to Pickens in the back of the end zone to put the Steelers up 24-17 with 9:55 left in the fourth quarter.

Flowers returned Wright’s kickoff to the Colts’ 25-yard line. Indianapolis went three-and-out, and up seven, Pittsburgh got the ball back with 7:55 to go. Snell gained eight yards on first down, and on 3rd and 1 the Steelers turned to FB Derek Watt and he gained four yards and a first down. Later in the drive, Pickett got sacked on 2nd and 7 and lost six yards, and on 3rd and 13, Pickett dumped it off to Snell who was short of the sticks, so the Steelers punted. Harvin’s punt was downed at the Colts’ seven-yard line, so Indianapolis would have to travel 93 yards within 3:52 to try and tie the game up (or take a lead on a two-point conversion).

On first down, Ryan took a shot to Pittman Jr and connected for a 28-yard gain. After a four-yard gain by Taylor, Woods gained 17 yards over the middle of the field and the Colts were quickly in Steelers territory at their 44. On 3rd and 6 later in the drive, Ryan threw short of the sticks to Pittman and he was tackled after a gain of four. On 4th and 2, Ryan’s pass was tipped but still caught by Pittman just beyond the first down marker, so the Colts got a new set of downs.

On the ensuing first down, Ryan was sacked by Highsmith and fumbled, but OL Will Fries recovered for the Colts. Ryan took off on a scramble on 2nd down, and he picked up 14 yards. Taylor was stuffed on 3rd and 3, so the Colts would have 4th and 3 with 30 seconds left. Ryan’s pass on 4th and 3 was incomplete, and the Steelers escaped with a 24-17 win.

The Steelers move to 4-7 with the win, and they will travel to Atlanta to battle Marcus Mariota and the Falcons on Sunday at 1:00 p.m.