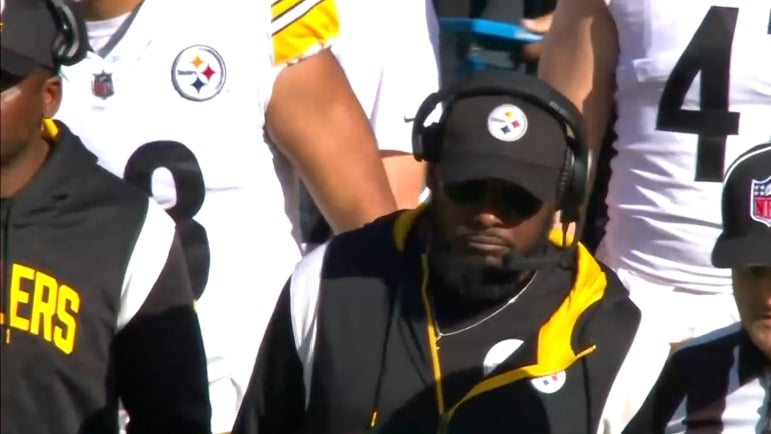 Two losses in a row, losers of six of their last seven games, the Pittsburgh Steelers are one of the worst teams in the NFL, full stop.

Knowing that, it shouldn’t be surprising to see the black and gold continue their free fall to the bottom of the league in the latest power rankings from NFL.com’s Dan Hanzus Tuesday morning.

Coming off of a 35-13 loss to the Philadelphia Eagles in the battle of the Keystone state, the Steelers fell three spots in Hanzus’ power rankings from No. 24 last week to No. 27 this week, dropping behind the likes of the Chicago Bears, Washington Commanders and Denver Broncos, and just ahead of the Indianapolis Colts, Carolina Panthers and Jacksonville Jaguars in the top 30.

Not exactly the company the Steelers are used to keeping in the power rankings, yet here they are.

“The Steelers weren’t ready for that smoke. A young Pittsburgh team went to Philadelphia and found itself overmatched in a 35-13 loss that could have been a lot worse if the Eagles kept their foot on the accelerator in the second half,” Hanzus writes regarding the Steelers ranking at No. 27 overall. “Minkah Fitzpatrick and the secondary were humbled, as Eagles star A.J. Brown collected three long touchdown receptions in the first half alone. With Pittsburgh’s playoff chances fading by the week, it will be interesting to see if the team shifts into a more conservative approach in regard to T.J. Watt. The reigning Defensive Player of the Year has been on injured reserve since Week 1 with a torn pectoral muscle.”

The Steelers certainly weren’t ready for the smoke that came with the Eagles on Sunday, that much was clear. While they tried different things to attempt to defend the Eagles’ explosive offense, they just had no answer and it showed on the field throughout the game and ultimately on the scoreboard.

Sunday’s loss was a good measuring stick for where the Steelers are as a franchise at the moment. It’s not a good place, to be clear. Far too many holes on the roster and too many issues within the scheme on both sides of the football. It’s not getting fixed this year.

While this might be some unfamiliar territory for the fan base overall, the Steelers were once 2-6 through nine weeks, all the way back in 2013 under head coach Mike Tomlin.

The Steelers then rebounded to win six of the final eight games, going 8-8 on the season. It’s a bit of a stretch to believe that could be the case this season and the Steelers could somehow get to 9-8 preserving Mike Tomlin’s non-losing seasons mark, but if there’s any way for that to happen, it’s now coming out of the bye where the schedule gets a bit easier.

Matchups with the New Orleans Saints, Cincinnati Bengals and Indianapolis Colts marks the first three weeks out of the bye, while matchups with Atlanta, Carolina and Las Vegas – not to mention two AFC North matchups with the Baltimore Ravens — awaits.