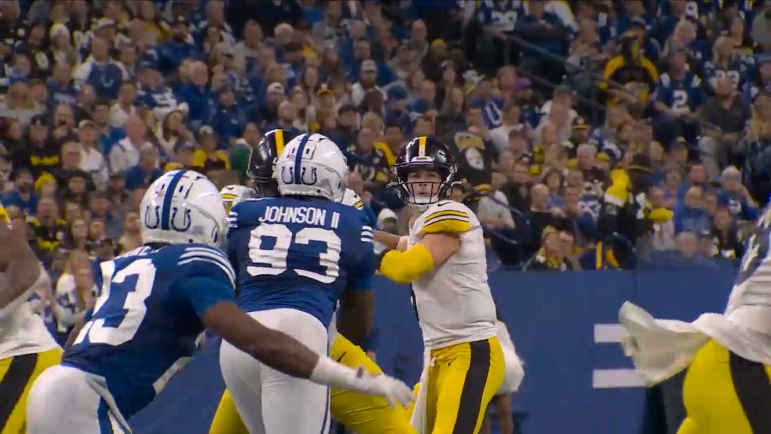 Pittsburgh Steelers rookie quarterback Kenny Pickett just had his best game of his career Monday night against the Indianapolis Colts as he recorded an incredible 71% completion percentage and led his first ever fourth quarter comeback with an eleven play, 75-yard touchdown drive.

The Colts tried to get to Pickett through the blitz throughout the night, and especially on that drive, but the rookie stood tall throughout. In fact, Pickett has been at his best throughout the season when facing the blitz. Jeff Kerr of CBS Sports mentioned how Pickett’s poise against the blitz has continued in his article “One thing we learned about each NFL team in Week 12.”

“Pickett has a 71.7% completion rate against the blitz, which is the highest among all NFL quarterbacks” wrote Kerr. “In Monday’s win over the Colts, Pickett went 7 of 9 for 69 yards with a 98.6 passer rating, playing mistake free football when defenses send an extra rusher to challenge him.”

A play where Pickett excelled against the Colts’ blitz was when he found George Pickens on the game winning drive on a third and nine. With a man in his face he fired an absolute dart into the hands of Pickens to convert the first down with a defensive back draped on Pickens. Next Gen Stats gave the play a completion probability of 23.9%

The Steelers rookie connection comes up big on third down with Kenny Pickett finding George Pickens across the middle for 13.

Pickett does a great job navigating the pocket and making the throw under pressure while Pickens does a phenomenal job adjusting to it. pic.twitter.com/nEVNJQNkHH

Pickens has run a go route on a league-high 43% of his routes this season (min. 200 routes).#PITvsIND | Powered by @awscloud pic.twitter.com/C49ml8CSJk

While Pickett has certainly had his struggles this year, he’s picked teams apart when they try to blitz him. The Cincinnati Bengals learned the hard way a week ago when they blitzed Pickett in the first half which allowed the Steelers quarterback to have his best half of football of his young career. After adjusting and laying off the blitzes they were able slow him down.

Being strong against the blitz is super important as it is something that can sink young quarterbacks careers.

Being able to pick teams apart when the blitz will force them drop more men into coverage and hope they can get to the quarterback rushing only four. If the Steelers offensive line improves this should give Pickett lots of time to scan the field and find someone open, and when given time, someone will eventually get open.
It may take some time for the game to slow down more for Pickett and for him to continue to learn and understand NFL defenses, but the fact that he is poised against the blitz is a very good sign for his future.