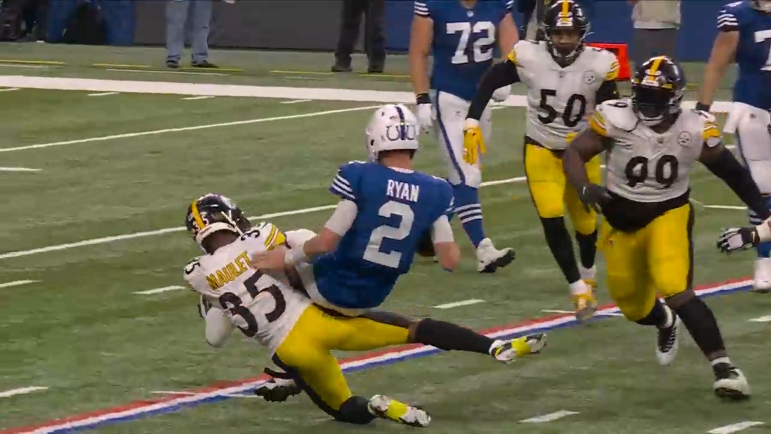 Some weird after a fun win.

– RB Anthony McFarland finished Monday with 30 yards rushing, the most he’s had in a game since his NFL debut on September 27th, 2020.

That hasn’t happened since – get this – December 18th, 2005, Ben Roethlisberger’s second year in the league. An 18-3 win over the Minnesota Vikings, Willie Parker had 14 rushes that day followed by Jerome Bettis (nine), Verron Haynes (nine), and Ben Roethlisberger (six).

Of course, the Steelers won the Super Bowl that year. So that must mean…

– Ten different Steelers caught a pass last night. I can’t even begin to tell you the work it’d take for me to find the exact last time that happened but I bet it’s been a little while. And those stats illustrate what a total team effort things were to win.

With last night’s sack, you can add Alex Highsmith to the list. He notched #10 at the end on the final drive.

– Two Steelers’ DBs had sacks tonight, Arthur Maulet and Terrell Edmunds, the first two DBs to do so in one game since Week 2 of the 2020 season. That day, it was Edmunds and CB Mike Hilton.

– CB Arthur Maulet’s 10 tackles were a career-high. He’s the first Steelers’ DB to have 10+ tackles and a sack in a game since CB Dewayne Washington did all the way back in 2001. Lee Flowers did the same in 2000 meaning it happened in back-to-back years more than two decades ago and then didn’t happen until last night.

– The Indianapolis Colts did not have a single yard of offense in the first quarter of their loss.

– Finally, Pittsburgh hasn’t turned the ball over in three straight games, Weeks 10-12. First time that’s happened since…Weeks 10-12 of the 2016 season. They went 2-1 over both stretches and each season had a Week 12 win over the Indianapolis Colts.

So that history is telling. If the trend continues, the team will have two turnovers against the Atlanta Falcons this upcoming weekend just as they had in Week 13 of 2016 when they turned the ball over twice against the New York Giants. Good news – Pittsburgh still won that game 24-14.