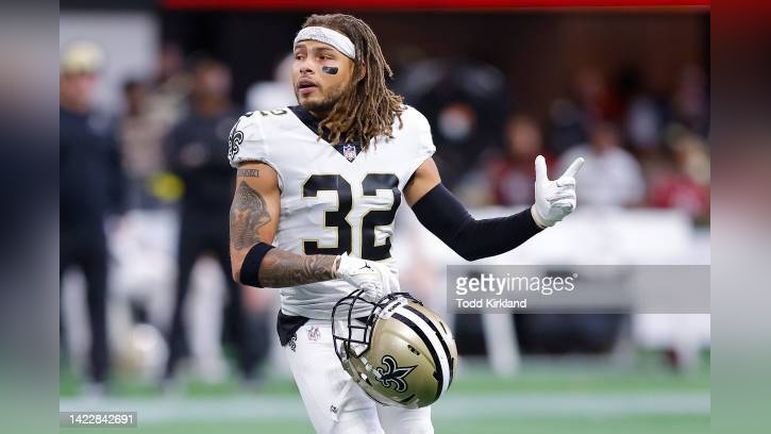 As we’ve been doing for several years now, we’ll break down the Pittsburgh Steelers’ opponent each week, telling you what to expect from a scheme and individual standpoint. This year, Jonathan Heitritter and I will cover the opposing team’s defense. I will focus on scheme, Jonathan on the players.

A middle-of-the-pack run defense, tied for 16th in the league allowing 4.5 yards per carry. They’re a 4-3 front but have been a little more multiple and flexible, especially trying to contain some of the athletic quarterbacks they’ve faced like Baltimore’s Lamar Jackson in Week 9. It’s important to note against two-back looks, the Saints will employ a five-down front and try to tighten up against the run.

They also tend to shift their DTs more against motion than other teams, often having a designated strong/weak tackle that can and will flip when the tight end shifts.

Linebacker Pete Werner is far and away the team’s leading tackler with 74. The next closest has just 50. Werner is in danger of not playing this weekend so the focus will be on veteran Demario Davis, an underrated linebacker who is having an excellent season. He’s the man second on the team with 50 tackles, eight of them for a loss, and as we’ll delve into the pass defense section, a whopping six sacks. Despite having fewer tackles, Davis is the team’s every-down linebacker – you don’t get six sacks playing early downs only – and hasn’t come off the field once this season.

As a team, they’ve allowed 28 runs of 10+ yards, tied for 17th in the league. So a very average run defense but some of their injuries to Werner could ding them.

Schematically, it’s a pretty aggressive front that likes to slant its defensive line and shoot its linebacker. They defend the perimeter well with speed and pursuit and their entire defense can tackle out on the edge.

Some other stats. They are the 28th-ranked scoring defense allowing 25.2 points per game. They’ve allowed 20+ points in eight of nine games this season and 25+ in five of their last six so you’d like to think the Steelers can get to at least 21 this weekend, something their offense hasn’t done all year. They’ve forced just seven turnovers all season, one of the league’s lowest marks.

They’re a solid situational team. Tenth on third down at 37.1% and seventh in the red zone at 50%.

They have generally kept a lid on things. They’re allowing just 6.9 yards per attempt, tied for 10th in the league while allowing just 20 completions of 20+ yards, sixth-best of any defense in the league. Their 22 sacks are slightly above average, tied for 15th. As I mentioned above, Davis is the team leader with six sacks, easily the most of any off-ball linebacker in football. Veteran Cam Jordan is still doing his thing with five sacks while five total Saints defenders have at least a pair. DB J.T. Grady is right behind with 1.5 of them.

The Saints don’t blitz much, 17.1% of the time (24th). While their sack number is average, they’re actually not getting consistent pressure, 28th in football at just 17.5%. So they’re finishing their chances but not creating enough of them.

They’re also not taking the ball away enough. The Saints are 31st in the league with just two interceptions, both coming from safety/nickel Tyrann Mathieu. No other player on that defense has intercepted a pass this season.

Schematically, they play a fair amount of split coverages and match/carry routes vertically while locking the backside.

Kenny Pickett will have to account for Mathieu on every single snap. They rotate and disguise him well and he makes a lot of plays underneath. Watch him lurk underneath and pick off this tipped pass. Those are plays he can make and he’ll be trying to bait a rookie QB this weekend. Watch #32 here.

On third and long, the Saints use amoeba fronts and present a lot of sim pressure looks. Watch for the nickel corner from the field side to come off the edge. They also align a DT head up over center to make it tough on him to be able to slide and help on the edges against games and blitzes.

The Steelers come off their bye week and will open the second half of the season at home against a New Orleans Saints squad that is currently doing some soul-searching themselves after a Monday Night loss to the Baltimore Ravens, dropping them to 3-6 on the year. The defense itself has been ok, ranking 11th in the league in passing yards allowed and ninth in the league in rushing yards allowed according to Pro Football Reference. The run defense hasn’t been to the same level as it has been in recent seasons with opponents averaging 4.5 YPC thus far in 2022, but the unit still has several notable players at every level Pittsburgh will have to gameplan for this week.

The defensive line has been a stout unit upfront for New Orleans in recent memory thanks in part to the heavy emphasis they have placed on investing in the trenches. They have three former first-round picks just at edge rusher alone with the elder statesman of the group being DE #94 Cameron Jordan.

Jordan was drafted back in 2011 and has been one of the league’s best pass rushers ever since, totaling 112 career sacks and 145 TFLs. Jordan is a skilled pass rusher, having multiple tools in the toolbox to beat the opposition in pursuit of the QB. One of Jordan’s favorite moves is the cross chop/club where he will clear the blocker’s punch and then use a swim move over the shoulder to get into the backfield and sack the QB.

Jordan is paired with fellow former first-round pick #92 Marcus Davenport to form a dynamic duo on the edge. Davenport is a physical freak, standing 6’6, 265lb with the speed, strength, and explosiveness to run through blocks and track down ball carriers from behind. Davenport had a slow start to his career but came through big with a nine-sack season in 2021. He is currently dealing with a calf injury but is trending in the right direction to play Sunday. Watch this rep where Davenport and Jordan meet at the QB where Jordan utilizes his cross chop/club combo and Davenport overwhelms the guard as he runs him into the lap of Kirk Cousins.

Jordan and Davenport are joined by 2021 first-rounder #98 Payton Turner who serves as a rotational defender and pass rusher that is still developing as a pro along with #90 Tanoh Kpassagnon and #96 Carl Granderson who are more depth pieces that occasionally see snaps in relief of either starter.

On the interior, the Saints have DL #93 David Onyemata who has been an underrated defender in this league since he was drafted by New Orleans back in 2016. The 6’4, 300lb defensive tackle plays with impressive strength and power at the point of attack, being able to collapse the pocket and bullrush smaller guards and centers into the QB’s lap. Onyemata also has a great motor to play chase of the football, being a quality run defender while also providing a viable pass rush. Onyemata is joined on the interior by #99 Shy Tuttle who is in his second season as a full-time starter along with backups #97 Malcom Roach and #91 Kentavius Street.

The linebacking core for the Saints used to be a big problem on the roster as the team couldn’t find consistent, high-level play. They found that when they signed LB #56 Demario Davis back in 2018 who has been one of the best off-ball LBs in the league since then. The veteran LB is a tackling machine, going over the century mark in every season since 2017 along with double-digit TFLs and 3-5 sacks. Davis already has six sacks this season, using his aggressive pursuit and great play speed to track down QBs and ball carriers in the backfield. He is one of the soundest run defenders in football and isn’t a slouch when it comes to coverage either.

Playing beside Davis in the box is #20 Pete Werner who has provided a nice compliment in the LB core. Werner was drafted last season and started eight games and has started every game this season for New Orleans. Werner is a good coverage defender in his own right, having the athleticism to run with backs and tight ends in coverage while using those same traits to chase ballcarriers as a run defender. Werner suffered an ankle injury on Monday night and his status for Sunday’s game is up in the air.

Along with Werner and Davis is #55 Kaden Elliss who has played himself into the role of New Orleans’ third off-ball LB, starting four games with 20 tackles and two sacks.  #53 Zach Baun and #50 Andrew Dowell also provide depth and serve as core special teams contributors for the Saints.

The Saints CB room is headlined by three-time Pro Bowler #23 Marshon Lattimore. Lattimore is one of the better corners in the league when healthy, having the size, length, and athleticism to match up with most receivers on the outside. He is a ballhawk on the backend, having picked off 13 passes in his first five seasons. Lattimore has been out since October 16 with an abdomen injury and looks to be in line to miss another game this Sunday.

With Lattimore banged up, New Orleans has had to rely on others in the secondary to step up in his absence. One defender that has risen to the occasion is #29 Paulson Adebo. Adebo was drafted in the third round last season and has become a quality starter opposite Lattimore. He picked off three passes as a rookie last season and is a willing tackler against the run. Adebo does struggle against quicker, more nuanced route runners, possibly giving a WR like Diontae Johnson an advantageous matchup should Lattimore miss this game.

Along with Adebo is rookie #27 Alontae Taylor who gives New Orleans another long, athletic corner that covers well on the outside in man coverage but can allow separation in off-man coverage and also can struggle in the slot when matched up with more shifty receivers. Grizzled veteran #19 Chris Harris Jr. is also in the CB room and plays some safety and nickel corner along with #26 P.J. Williams who primarily provides depth.

The Saints lost star safety Marcus Williams in free agency this offseason but brought in #32 Tyrann Mathieu to replace him. Mathieu has been a playmaker ever since he stepped foot into the league in 2013, amassing 28 INTs, 79 PBUs, four forced fumbles, and seven fumble recoveries in that span. Mathieu is the definition of a chess piece, being able to play all over the defense as he uses his instincts to make plays on the ball and come up with turnovers.

The Saints also brought in #6 Marcus Maye this offseason to play alongside Mathieu in the secondary. Maye played free safety to start his career with the Jets but has seen a fair amount of time in the box playing strong safety in his last season in New York as well as with the Saints. Maye hasn’t lived up to the signing thus far, struggling to cover pass catchers in man coverage situations and being out of position occasionally in zone.

#48 J.T. Gray, #25 Daniel Sorenson, and #30 Justin Evans round out the secondary for the Saints with Evans playing the most in a rotational role on defense while the others provide more special teams value.