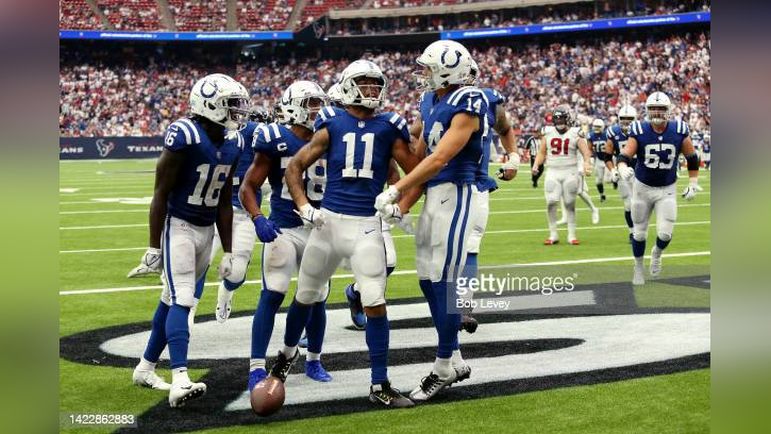 Though their run game doesn’t have the teeth it did last year, it’s still a potent rushing attack led by Jonathan Taylor, one of the most talented backs in football. He remains the team’s bell cow. Though hampered by injury earlier in the year, he’s played 75% of the offense’s snaps in six of the eight games he’s participated in this year. Taylor’s still averaging a healthy 4.6 yards per carry, the 11th-best of any back with 100+ carries this season. Still, that’s down from 5.5 yards per carry in 2021. His touchdowns are also way down – 18 touchdowns last year, just three so far this season. Ball security has been an issue for him, though that’s in part due to his volume, and he has three fumbles this year after fumbling four times a year ago. Those three fumbles are tied for the second-most of any RB in the game, only behind the recently waived Melvin Gordon.

Taylor is the main back in this offense. With Nyheim Hines dealt to Buffalo, Deon Jackson is the backup but he’s more active in the passing game, which we’ll touch on below.

As a team, the Colts  are averaging just 4.1 YPC, 25th in the league (to be clear, all these stats from me will be entering Week 12 and don’t reflect the weekend’s results). They have only six rushing scores, tied for 28th overall. They have just 26 runs of 10+ yards, tied for 25th in the league, so their run game is far below where it was a year ago. But again, some of that has been without Taylor and his “down” year is still a good year for most other backs in the league.

Schematically, they are a heavy man-blocking/duo team that loves running behind big and powerful LG Quenton Nelson. Some clips of that below.

Like many teams, including the Steelers, watch out for split flow action from an off-ball tight end. They also run outside zone, which you can sometimes anticipate when they’re in 12 personnel, like here.

They will also use a 6th offensive lineman. Some other offensive stats: Entering Week 12, they ranked 31st in points per game at just 15.7, only ahead of the Denver Broncos. They’ve scored 26+ points in just one game this year and have been held under 20 in four of their last five. In a word, their offense has been unproductive. That’s in large part due to their poor situational football, 25th on third down (36.9%) and an even worse red zone offense, 30th at 43.3%. It’s a minor miracle they aren’t last.

Matt Ryan’s back in the saddle after being briefly benched during the year but brought back when Jeff Saturday was named interim coach. Rumor has it Ryan was benched at Jim Irsay’s demand, not due to old HC Fran Reich’s decision. Ryan has a very high completion percentage, third-highest at 69.2%, but that’s due to his short-game throwing. His YPA sits at 6.8, tied for 21st out of 35 qualifiers. In the two games since his return, his completion sits at a whopping 73.3% and he hasn’t turned the football over. He should have never been benched in the first place. Still, I’m not going to act like he’s been anything better than mediocre, throwing 10 touchdowns to nine interceptions.

Michael Pittman Jr. is the Colts’ leading receiver in targets, catches, and yards with a 67/678 line on 92 targets. But he’s found the end zone once this year, making him an excellent future Steeler. Paris Campbell and TE Jehlani Woods are tied for the team lead with three touchdowns, though two of Woods’ occurred way back in Week 3. Tight ends are a big part of the offense, a multi-head attack. Combined, they make up for half of the team’s passing TDs this year and three of them have 10+ receptions. Kyle Granson is more of an H-Back type but a good athlete.

As a team, they have 31 completions of 20+ yards, tied for 15th in the league. Rookie Alec Pierce is a big reason for that, averaging a team-best 15.1 yards per grab. He’s finished with 20+ yards per catch in four games this season. Elsewhere, RB Deon Jackson has 20 receptions on just 116 total offensive snaps.

Conceptually, it’s a short pass game that relies on slants and throws to the flat. They run a ton of slant/flat concepts to backs, tight ends, and receivers. Some examples.

They also have designed concepts to their back, like these essentially screens to the back in the flat with receivers blocking.

Ryan will always check the X receiver on the backside and look to take advantage of 1v1 matchups. Like the Bengals, they also run a fair amount of spacing/Hank concepts and allow Ryan to pick the best matchup based on defender and leverage.

They also like the Matt Canada-special sprintout but they smartly use it on third and short to move the sticks as opposed to the Steelers, who used it on 1st and 10 or more often, 2nd and long, to set up third and medium.

The Colts have been sacked 40 times this season, tied for the league-high coming into the week. They’ve had a revolving door of linemen, eight of them playing at least 1/4 of the team’s snaps, and have struggled to find consistency at most spots. While Ryan hasn’t been sacked at the rate of his temporary replacement Sam Ehlinger, he’s still been taken down 29 times this season. Pittsburgh’s pass rush should be in good shape this weekend.

With it comes a matchup on Monday Night Football, the lone MNF game of the season for the black and gold.

After taking over the Colts in surprise fashion, Saturday has given Indianapolis the kick in the pants that they needed this season. The former Pro Bowl center for the Colts in the mid-2000s reinserted Ryan back into the starting lineup and put more of an emphasis on running the football once again, which has led to the Colts looking more and more like the Colts of the last few years once again.

Offensively, not much has changed with the elevation of Parks Frazier into the offensive coordinator’s position. Frazier was Reich’s right-hand man during their time in Indianapolis, so he’s still running the same offense.

Execution is just better, and it starts with star running back Jonathan Taylor and the Colts’ offensive line.

Taylor, who finished as the MVP runner-up last season after rushing for 1,811 yards and 18 touchdowns, is starting to look like last season’s version once again. When he’s at his best he’s a one-cut runner that puts his foot in the ground and fires downhill, chewing up a ton of yardage with his sprinter’s speed.

When he gets a seam, chances are he’s going to rip off an explosive run. Oftentimes it ends up in the end zone too, like this run against the Las Vegas Raiders in Week 10, ending in a 66-yard touchdown run.

Last week against the Eagles, though he didn’t have as prolific of a day, he chewed up the Eagles’ defensive front early, ripping off an explosive run on his second carry of the game.

Again, one cut and get vertical with speed. Look at the ground he chews up, destroying angles in the process.

With Taylor thriving once again in the backfield, it’s opened up the RPO and quick throw game with Ryan, who has carved up defenses over the middle in recent weeks since being inserted back into the starting lineup.

There’s been more of an emphasis on getting star receiver Michael Pittman the football in space, allowing the YAC monster room to run after the catch. In space, he’s a load for defensive backs to tackle, especially when he has a full head of steam.

Pittman will draw much of the attention, but rookie speedster Alec Pierce is having a strong year as the deep threat the Colts have desperately needed in recent years. He is a solid route runner, one that can jump out of the gym in contested catch situations and is strong enough to play through contact consistently.

Then there’s veteran slot option Parris Campbell, who has finally stayed healthy this season and is thriving with Ryan under center.

Campbell is dangerous in space and can take a short throw the distance with his homerun speed.

At tight end, the Colts have a three-headed monster when healthy in Mo Alie-Cox, second-year pro Kylen Granson and rookie Jelani Woods.

Granson has really emerged this season as a dependable option for Ryan, especially in recent weeks. He’s a move TE that can line up all over the formation and has great body control and YAC abilities.

Since being inserted back into the lineup, Ryan has looked Granson’s way in big spots in recent weeks and has been rewarded. Though the Colts haven’t gotten the production out of the position they were hoping for this season, that trend is starting to change in recent weeks.

With his versatility and YAC tendencies, Granson is coming on strong.

That said, he’s doubtful for Monday night’s game, which could be significant for the Colts’ offense. If Woods is able to go this week though, he can plug and play in Granson’s role due to his athleticism.

Up front, the offensive line is what stirs the drink for the Colts. When the starting unit is clicking, this is a hard offense to stop. That hasn’t happened much this season, but Saturday challenged them when he took over and they’ve responded.

Here’s how I expect them to line up on Monday night, left to right:

Nelson is starting to look like the All-Pro left guard once again, though Kelly is struggling next to him in pass protection.

Fries has been rather surprising since being inserted into the starting lineup. A versatile piece out of Penn State, the second-year pro seems to have found a home at right guard. He’s a smart football player that reads things well and has good technique. Smith has been up and down next to him, underperforming overall after being a Pro Bowler the last few years.

Special teams has been an adventure for the Colts. After losing veteran punter Rigoberto Sanchez in training camp to a torn Achilles, veteran punter Matt Haack has stepped in and is averaging 44.8 yards per punt.

That said, he’s had one blocked on the year.

Kicker has been a real issue for the Colts. The franchise cut Rodrigo Blankenship earlier in the year and seem to have settled on Chase McLaughlin. He’s connected on 19-of-23 field goals on the year, including a long of 52 yards, but every kick feels like an adventure with the journeyman.

In the return game, Isaiah Rodgers is a dangerous kickoff return man. He just doesn’t get many chances to run out kicks. He’s averaging just 21.8 yards per kickoff return on the year on 13 returns with a long of 34 but does have a kickoff return for a touchdown to his credit in his career.

Veteran Keke Coutee is the punt return man. It’s an adventure every time the ball is punted to him. He’s had a lot of success, but he’s struggled to catch punts cleanly all season long, which could backfire on him here soon.