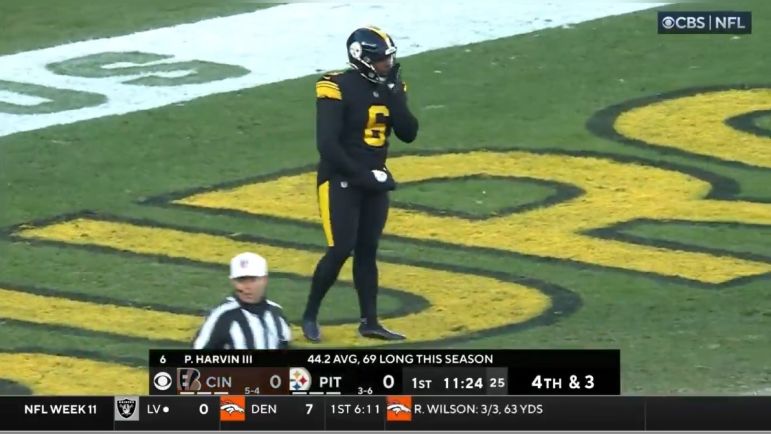 After a difficult rookie year on and off the field, Pressley Harvin is showing why the Pittsburgh Steelers made him their 7th round pick in 2021. In numbers and in tape, Harvin has grown and earned Mike Tomlin’s praise at the top of his Tuesday press conference.

“Think Pressley’s been in really good rhythm in terms of flipping the field from a punting standpoint,” Tomlin said during his weekly session via the team’s YouTube channel.

One reason for those numbers could be the amount of directional punting the team has asked Harvin to do this year. There have been fewer punts to the middle of the field and more towards the sideline. That potentially hurts average, not trying to boom the ball 70+ yards and lose accuracy, but increases net by limiting the space the return man has to work with and helping the coverage team’s leverage. Harvin displayed that in Sunday’s loss to the Cincinnati Bengals. Here’s a cut-up showing examples of his directional punting.

Later in his presser, Tomlin continued to praise Harvin.

“Pressley’s doing a good job in year two of really growing in all areas and checking the boxes that we need him to check in terms of being a positive contributor to our efforts.”

Pittsburgh’s shown plenty of faith in Harvin since drafting him. After beating out incumbent Jordan Berry last summer, the team stood by Harvin throughout his difficult first year in the league. This summer had little in the way of punting competition with Harvin easily winning the job. Though Harvin had a rocky start to the year, the team never wavered and their patience is being rewarded.

Of course, Pittsburgh punters aren’t judged by what they do early in the year. They’re judged by how they end things, playing in cold, windy, and often ugly November and December games. Harvin did well on a frigid Sunday against the Bengals but he’ll have to keep that going through the rest of the season. However, he will have the benefit of playing inside domes the next two weeks, Monday night versus Indianapolis and Week 13 at Atlanta. His next outdoor come will come in Week 14 against the Baltimore Ravens with cold-weather slates against the Raiders at home Week 16, at Baltimore Week 17, and hosting the Cleveland Browns in the regular season finale. That will serve as the true test of his season.