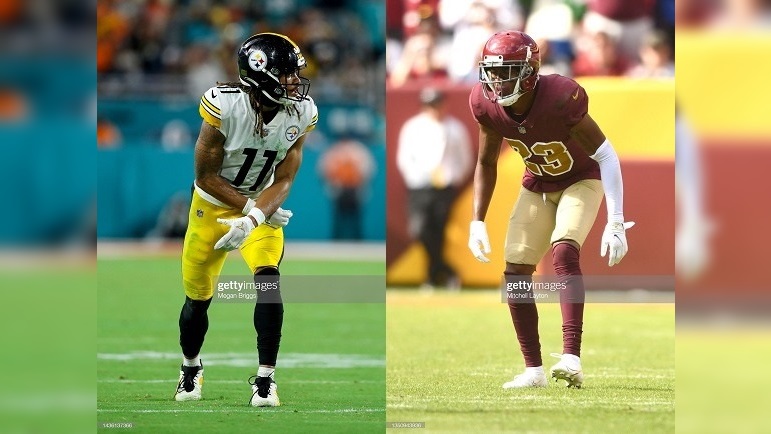 The Pittsburgh Steelers were uncharacteristically active on the day of the NFL trade deadline, making two key trades. That is, the Steelers traded for Washington Commanders’ cornerback William Jackson III, and traded receiver Chase Claypool to the Chicago Bears for their second-round pick. Both of these trades garnered mixed reactions. In grading all the trade deadline moves, Brad Spielberger of Pro Football Focus had strong opinions about both the team’s trades in a Wednesday article.

“Whenever you can use a second-round pick on a player and flip him for what will likely be an even higher second-round pick two-and-a-half years later,” Spielberger said in justifying his good grade for the Steelers end of the Claypool trade. “You’ve probably done pretty well. After Pittsburgh extended wide receiver Diontae Johnson and drafted George Pickens in the second round this past year, Claypool became unlikely to receive an extension in Pittsburgh.”

Indeed, the Steelers got surprisingly high draft compensation, as the 3-5 Bears are likely to have a high second round pick. As Spielberger mentions, Claypool had a strong rookie outing and has regressed every season since. The 6’4 238 lb receiver had unique physical tools, but was never able to put it together in Pittsburgh. After the team drafted fellow receiver George Pickens, Claypool’s role made it fundamentally harder for him to progress in Pittsburgh. That is, Claypool moved to the slot in 2022, which never proved to be a good fit.

Spielberger gave the Bears end of the trade a below average grade, as they argued that Claypool does not have the merit for the compensation they gave up. Indeed, Claypool was the number 3 receiver on the Steelers, and the move is therefore risky. It is possible for this move to work out for the Bears, but getting back a second round pick for the Steelers is worth it regardless given Claypool’s poor fit with the team.

“The Steelers don’t need to tank or do anything drastic,” Spielberger said in justifying his below average grade of the Steelers’ end of the Jackson trade. “But it’s hard to see this move significantly impacting the win-loss columns. Jackson has a 55.7 coverage grade since signing with Washington in 2021.”

The Steelers’ interest in Jackson dates back to the 2016 NFL draft, which was further proven by this move nearly seven years after the fact. As is well known, he was snatched by the team’s AFC North rival Cincinnati Bengals one pick before the Steelers.

There is no denying that the Steelers have a hole at the corner position, and a low-risk move to improve upon this may find up working in their favor. The starting trio at the position to begin the season included Ahkello Witherspoon, Levi Wallace, and Cameron Sutton. Wallace has suffered several injuries, while Witherspoon is playing poorly and was recently benched, leaving Sutton and James Pierre as their only experienced starters.

Regarding Spielberger’s argument about this win-loss column, this is a team that just gave up 35 points and four passing touchdowns in their most recent outing. A big part of this was the play of Witherspoon, who gave up 6 catches, 83 yards, and 2 TDs on seven first half targets before being benched. If Jackson plays even marginally better than this, it is not implausible for him to impact the outcome of a few games.

Granted, Jackson’s recent sample size of play is all but promising. However, there is an argument to be made that a change of scenery to a man-coverage heavy defense may utilize his skillset better. It is not unusual for a change in teams to result in a player drastically improving. If one thing is for sure, it’s that the Steelers have done their homework on Jackson, and likely have a plan to use him differently. Either way, this cornerback group cannot get much thinner or worse, and this is a low-risk move that may wind up panning out.