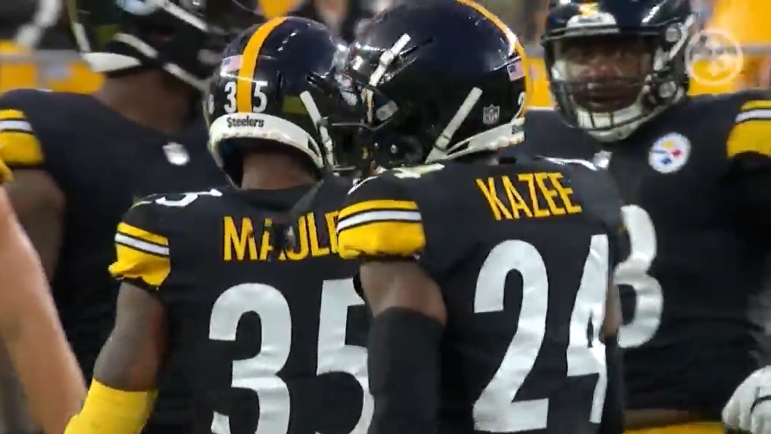 While Pittsburgh Steelers fans are greatly anticipating the return of outside linebacker T.J. Watt, he is not the only defender who is slated to make his return from the Reserve/Injured List in the very near term.

Veteran safety Damontae Kazee was placed on IR at the start of the regular season after suffering an injury late in the preseason. He has missed the first eight games, but should be ready to suit up and contribute the next time they take the field; he has already been practicing for a couple weeks.

Said defensive backs coach Grady Brown about their deploying a package for him similar to what they were working on during training camp, “It’s not out of the window”, via the team’s website. And, to be clear, he said it in a way that was assertively positive in response to a question about whether those plans had been scrapped.

Getting a versatile defensive back like Kazee into the fold gives the Steelers a variety of options, as he can play both safety (either free or strong, though primarily free) or in the slot. With Cameron Sutton, William Jackson III, Ahkello Witherspoon, Levi Wallace, and Arthur Maulet at cornerback, and Minkah Fitzpatrick, Terrell Edmunds, and Tre Norwood at safety, they are somewhat stocked up in the secondary now.

But first he has to get back on the field and back moving, and then they can figure out who to put where and when. “At the end of the day, the math is who’s playing the best and in what form or fashion how can you get those guys on the field?”, Grady said.

“No matter the combination, whether it’s Kazee, Mink, and ‘Rell, or if it’s Levi, Will, and Cam, and ‘Spoon, you have to get the best guys on the field, and that’s the only way you give yourself a chance to play. So whatever that formula is, and the best guys are not always necessarily the ‘best guys’. It’s about who’s playing the best”.

In other words, Kazee will be in that mix if what he does on the practice field and in games dictates that he should be. And to be honest, given the overall level of play that we’ve seen thus far this year, it shouldn’t be too hard for him to push to see some snaps in sub-packages sooner rather than later. At whose expense is the only real question.