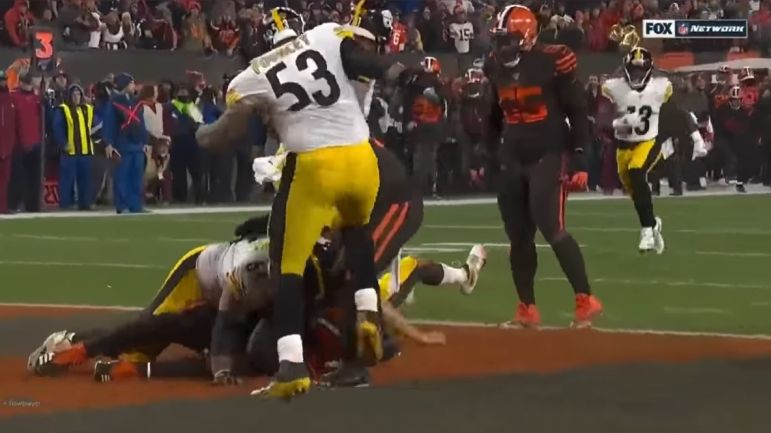 Maurkice Pouncey will go down as one of the greatest centers in Pittsburgh Steelers’ history, one in a long line of them that’s come through the franchise. And for one primetime matchup against the Cleveland Browns, he was involved in one of the biggest fights in recent NFL history.

2019. Myles Garrett against Mason Rudolph. Fans of either side know the story. End of game, Browns winning, Garrett tackles and takes Rudolph to the ground. They get into a skirmish, ones pretty common in the NFL, until Garrett rips of Rudolph’s helmet. Rudolph gets up, goes after Garrett who responds by swinging and hitting Rudolph over the head with his own helmet. That’s when Pouncey and the rest of the Steelers’ line steps in, kicking and punching Garrett as they take him to the ground. Larry Ogunjobi shoves Rudolph down, Rudolph calls him a bitch, it’s a bad scene.

End of the day, Garrett is suspended for the rest of the year, Pouncey is suspended three games (later reduced to two) and it’s one of the ugliest moments football’s seen in the past decade.

Joining Ben Roethlisberger as a guest on his Footbahlin podcast, Pouncey recalled the moment. With years gone by, a situation Pouncey can laugh about a bit more, though perhaps he’s doing that to mask the pain his wallet felt.

“I tell everybody, bro, I wish it were Ben because it cost me a lot of money,” Pouncey said with a laugh. “Don’t get me wrong It made me legendary but it was an expensive fight. The rest of the fights in my life didn’t cost me that much.”

A reminder of Pouncey’s actions, not initially involved but then very much getting involved once Garrett hit Rudolph over the head. He started with punches then a kick as RG David DeCastro took Garrett down followed by more punches.

While Garrett is primarily at fault and was rightfully bounced for the rest of the year, there were no winners that night. Still, offensive linemen standup for their quarterback and Pouncey, David DeCastro, and others did. Retelling the story, Pouncey says the moment is a bit of a foggy memory.

“The kick caught me off guard. Like, this is a real football game. This isn’t practice…the kick wasn’t even a real kick. That’s why I jumped back down to punch…like, ‘I’m tripping. I’m at a game.'”

Ultimately, Pouncey was suspended for two games, fined $35,096, with that suspension costing him two game-checks. In total, it cost him over $160,000. A total of 20 Steelers were fined for their involvement with Pouncey’s fine being the second-most, only trailing Rudolph’s. Most others were fined relatively minimal amounts for stepping onto the field after-the-fact.

During the conversation, the group continued to joke about the moment, Roethlisberger saying if it were him, Pouncey would have “gone to jail” with Pouncey basically agreeing.

“I wouldn’t have stopped. I would’ve kept kicking.”

Pouncey missed Weeks 12 and 13, including the rematch against the Browns, but the Steelers came out on top in both games. He returned to finish the season sans the season finale, a game in which he was inactive for. He told the show Steelers’ Nation loved him for weeks after the incident.

“Walking around Pittsburgh, every restaurant I went to, it was like a Rocky moment. Everyone had their fist pumped.”

Publicly, Pouncey has only spoken about the fight briefly, back in December of 2019 following his return. At the time, he said the fight was “worth it” and that he received a game ball from the team. Obviously, Pouncey is joking about the Roethlisberger comments and he’s always been one to stick up for his quarterback no matter who it was.

The Rudolph/Garrett fight continues to be one of the wildest football moments of the century. The good news is it’s become a footnote now generally forgotten about and left to history. Garrett’s moved on, Rudolph’s moved on, and heck, Ogunjobi is now a Steeler. But it’ll be a memory no one is going to forget.