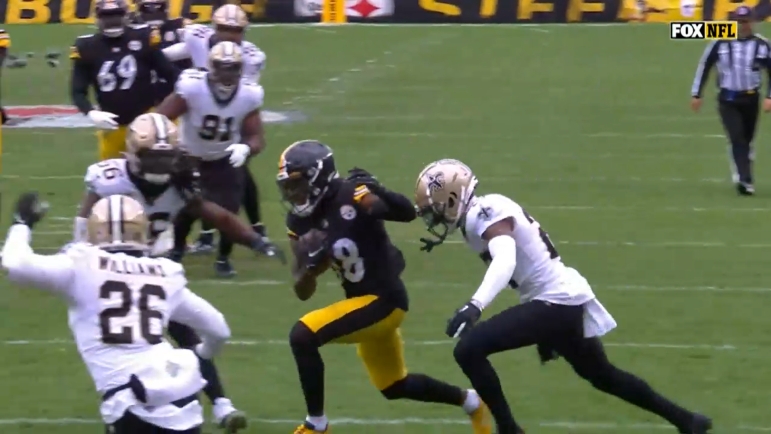 While the Pittsburgh Steelers’ offense again stuck at 20 points, an all-too common occurrence this season, the offense still looked its best this season. A much stronger ground game, a unit that finished drives, and one that took care of the football as opposed to giving it away. Getting into more specific changes out of the bye week, QB Kenny Pickett said the passing game used the middle of the field more often.

“We had a lot more in-breakers today with what they were showing and what they were giving us,” Pickett said via the team website. “And I think we did a good job of hitting those and giving guys opportunities to have some more run after catch, and that’s something we wanna continue to improve on.”

While we’ll have to get more specific data in the coming days, there’s no question the Steelers ran more slants in this game than they probably have all season. While it didn’t always lead to completions, it drew penalties, and Pickett did throw a dart to WR George Pickens over the middle for a key third down conversion.

Largely, the Steelers’ offense had previously been designed to attack the sidelines. Out-breaking routes with the launch point being moved. Comebacks, out routes, throws to the slat. And while those elements certainly were still there Sunday, the offense had more variety and a couple of nicely designed plays by OC Matt Canada. Even some of the screens were more successful, plays creatively run for WR Steven Sims and TE Pat Freiermuth.

Pittsburgh didn’t ultimately have many run-after-catch chances on those slants but it forced the Saints to be overly aggressive. One DPI call negated what could’ve been a massive catch-and-run, perhaps a touchdown, had the Saints’ DB not pulled on Diontae Johnson. Johnson hadn’t been used on enough of those routes this season and his YAC had tanked. After being the NFL’s 8th-best YAC receiver a year ago, he entered Sunday well outside the Top 100.

Those numbers probably didn’t dramatically change after this contest but the Steelers’ philosophy sure did. And hopefully this was a “proof a concept” game that compels Canada and company to keep trying going forward.