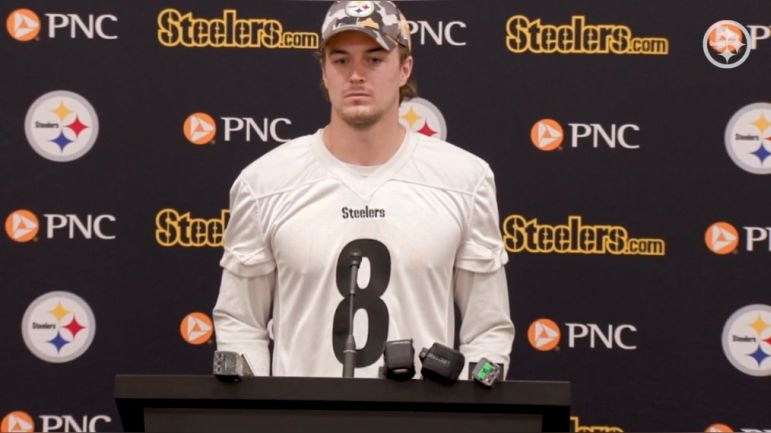 After blowing a 13 point halftime lead, all the pressure was on Pittsburgh Steelers rookie quarterback Kenny Pickett and his offense. A month ago he failed to provide a fourth quarter comeback against the Miami Dolphins, tossing two interceptions as he drove the Steelers down the field.

However, on Monday night, Pickett came through, leading an eleven play, 75-yard touchdown drive and then converting a two point conversion on top of that to give the Steelers a 24-17 lead with 9:55 to go in the game which the Steelers would hold.

Today, Pickett spoke with the media, which was streamed via Steelers.com, and addressed his game winning drive.

“It shows growth.” Pickett proclaimed. “We had the two three and outs, things weren’t going our way, we weren’t executing at a high level, and then at a big time moment in the game we came together and put together probably one of the best drives of the season.”

While you can argue other drives were better, given the circumstances around that drive and how much pressure was on the young Steelers offense it probably was their best drive of the season.

The Steelers converted three big third downs on that drive including the final one which was third and goal and resulted in a Benny Snell Jr. touchdown run. The game winning drive did everything right that Steelers fans had been complaining about this season. Throwing in the middle of the field? Check. Converting on third down? Check. Scoring a touchdown in the red zone? Check.

Not only did they do this, but also Pickett looked very comfortable in the moment, the offensive line looked good, and they did this away from home in a tough place to play against a good defense.

Going back and looking at Pickett and offense’s performance at the end of the Miami game is like looking at polar opposites. The two point conversion to George Pickens looked similar to the game ending interception in Miami except this time Pickett and his receiver were on the same page on where the ball was going.

This was their best drive, and arguably the Steelers best moment of the year. The young offense and rookie quarterback put it all together in one clutch drive. More drives like that consistently and the Steelers will have an offense who will be capable of leading the team to victories.