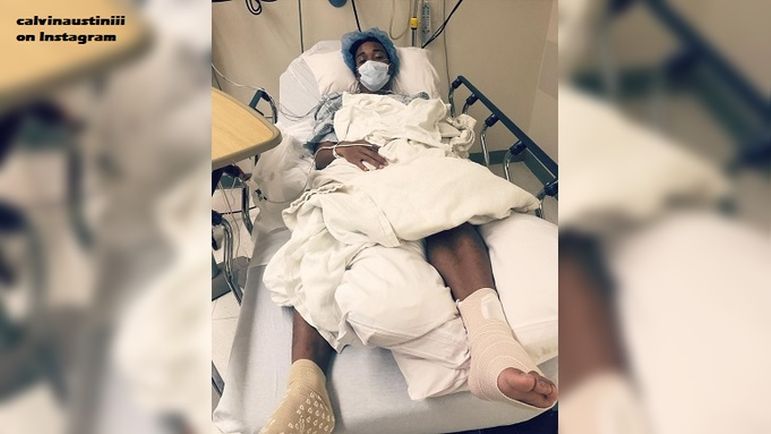 Though not breaking news, we have confirmation that Pittsburgh Steelers’ rookie WR underwent foot surgery that will shelve his rookie season. Austin tweeted a photo of him post-surgery Tuesday and vowed to return to full health.

As the photo shows, Austin had surgery on his left foot. He originally suffered a foot injury in training camp just days before the team’s preseason opener. But he avoided surgery and tried to rest and rehab it instead. Pittsburgh designated him to return in early October but he reportedly suffered a setback while practicing, requiring the surgery and keeping him on IR, officially ending his season before it barely got started. It’s still unknown the exact nature of the injury or surgery.

Austin also wrote out this caption underneath the photo.

“Appreciate all the prayers and texts, and Dr. O’Malley and his team for taking care of me! SteelerNation imma be back, I love adversity”

He references a Dr. O’Malley who appears to be Dr. Michael Joseph O’Malley, an orthopaedic surgeon who practices just outside of Pittsburgh for UPMC Hospital. His bio reads:

His bio also says he’s a leading doctor on total hip and knee replacements, though obviously, that’s not the type of injury or surgery that Austin is dealing with.

Austin will look to make a full recovery and return to the practice field for 2023 Steelers’ OTAs. Two foot injuries and one surgery for a player like Austin drafted for his speed isn’t a great sign but players recover quicker and better now than ever before. He’ll just need rehab and a lot of patience before he gets back up to speed and can resume his NFL career.