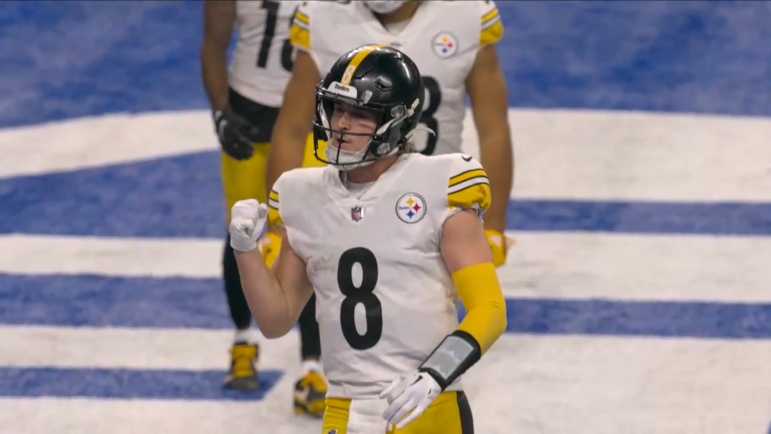 The Pittsburgh Steelers’ victory against the Indianapolis Colts on Monday Night Football saw a continued improvement in the team’s passing game. While rookie quarterback Kenny Pickett did not light up the stat sheet, he showed improvement and kept the ball out of harm’s way. In his weekly article that grades every rookie first round pick, Sam Monson of Pro Football Focus had high praise for Pickett.

“A stat line of 20-of-28 for 178 yards and no touchdowns screams ‘average’ on the surface,” Monson said about the Steelers’ rookie quarterback. “But Pickett put together easily the best game of his NFL career in the Steelers’ Monday Night Football win. He made one big-time throw and no turnover-worthy plays while completing his lone deep shot. In all, he finished as the second-highest-graded quarterback in the NFL for Week 12.”

Indeed, Pickett had one of his better games of the season. Playing behind a stout running game that produced over 170 yards, he managed the game well and did not miss many throws. The rookie quarterback led a game-winning drive to start the fourth quarter, converting three third downs and capping it off with an impressive throw on the two-point conversion.

The Colts defense is far from a weak group, especially given that Pickett faced them on the road. They came into the game ranking in the top 10 for points and yards, and beat the Kansas City Chiefs’ high-powered offense earlier in the season.

Pickett had an 88.5 PFF grade, which was the second highest in the NFL in Week 12. For perspective, his highest previous grade was 67.1 against the New Orleans Saints, highlighting how much he improved on the PFF scale. This was Pickett’s second start without any turnover-worthy throws. It is also important to mention that Pickett had an average depth of target (aDot) of 6.2 this game, which is his lowest of the season.

Ever since the bye week, Pickett and the offense have looked better, topping their prior season-high 23 points in all three games since. Playing behind an improved rushing attack doesn’t hurt for Pickett, who looks more and more comfortable with the offense every week. While it may be an overstatement to suggest that this offense found an identity, they have looked far better.

Earning the second-highest PFF grade in the NFL is a good sign for Pickett’s development. The rookie quarterback has come a long way since his first start, and has no shortage of confidence. As the team prepares to save a bottom five defense in the Atlanta Falcons, Pickett has another opportunity to continue his development.