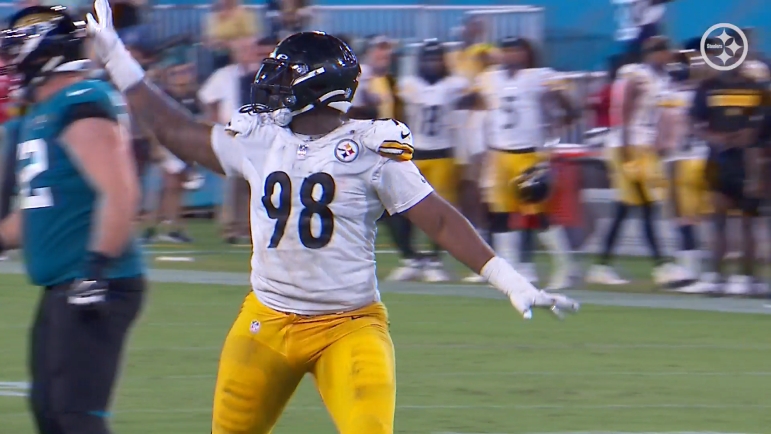 The Pittsburgh Steelers currently have two rookie draft picks on the Reserve/Injured List. Both of them returned to practice; the first, fourth-round wide receiver Calvin Austin III, ended up having surgery after reinjuring himself.

The second appears set to avoid a similar setback. Third-round defensive end DeMarvin Leal got a good chunk of playing time in the early portions of the season until he suffered a knee injury, which landed him on IR and required a minor procedure to clean up.

He’s been back practicing for weeks now, however, and it’s been hinted that he will be activated in time for Monday’s game. His agent, for example, talked about his return being “special”, which Leal shared on Instagram. He told Chris Adamski for the Tribune-Review that it “Could be” he gets activated, saying that he is 100 percent without restrictions.

Defensive coordinator Teryl Austin also said earlier in the week that they were going to evaluate where he is at the end of the practice week “and see if he can help us”. That makes it sound like he’s ready to go from a health standpoint, though it does point out a significant component of the equation.

The Steelers don’t have to activate him this week. If they don’t have an immediate plan to use him right now or feel he is still getting in game shape physically or mentally, they can wait another week before activating him from IR. And even Cameron Heyward stressed that they can overburden him.

Leal actually ended up playing sometimes standing up coming off the edge after Watt was hurt in the opener, a part of a multi-faceted plan to try to fill the void left by the injury to their Defensive Player of the Year.

Watt is back healthy now, and so is Isaiahh Loudermilk, so that makes it much less clear whether or not there is an obvious role for him right now. I don’t think we can take it as an absolute given that there is. He’s starting over back near the beginning, not just picking up where he left off.

And that’s partly because of what they were asking him to do due to the circumstances at the time, which no longer exist. They probably want him now to focus on more traditional 3-4 defensive line assignments and not worry about what they were throwing at him earlier.