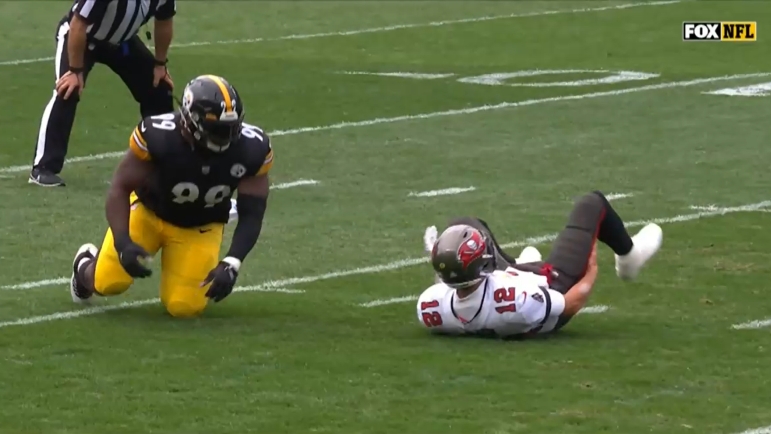 Self-identification takes on many forms, and in the sporting world, part of your identity is the number on your jersey. How much that particular number means to you will vary from player to player, but it does hold significant weight for many.

So it can be a problem when players change teams and they go to a team with a player who already has the same number. Under most circumstances, the player with seniority—and/or a fatter paycheck—will end up keeping the number whether he’s the new guy on the team or not.

That’s not what happened when defensive lineman Larry Ogunjobi signed with the Pittsburgh Steelers. He talked after he signed about being in talks with left tackle Dan Moore Jr. about getting his no. 65 jersey from the second-year player, but it didn’t happen.

“In 2017 I was the first pick in the third round, so the 65th pick, and it was kind of cool because I’ve worn 65 my entire football career—before I got here. But it’s all good,” he told Aditi Kinkhabwala in an interview yesterday evening on 93.7 The Fan.

“He had a family reason as well, and I respect that. All the greats had to do that at some point. Kobe changed his number, MJ changed his number,” Ogunjobi added. “At some point it’s fine. It’s not the number, it’s the man. I could’ve been any number, but 65 was just my number for such a long time and now I have to make 99 my number. It’s a process, but I enjoy it.”

Offseason roster jersey numbers are significantly less important because it’s no problem for two players on opposite sides of the ball—one offense, one defense—to share the same number. They wear different-colored jerseys, so identification is simple. Not so in the regular season.

Ogunjobi talked back during the very beginning of September as the regular season was approaching that negotiations were underway about the jersey. “We’re gonna settle that the next couple days,” he said. “We’re gonna see the numbers, how they come out”.

Well, we know how that came out because Ogunjobi changed his number to 99 a few days later. But it wasn’t about a price value—either for Ogunjobi or for Moore, and the defensive lineman was clear on that from the beginning.

“I feel like, I’m never gonna make a man change something that means something to him as well,” he said at the time. It means a lot to me as well.” Both players had worn the number 65 for an extended period of their football careers, if not the entirety.

But as Ogunjobi said, it’s about making 99 his number now—or at least for this season. Who knows what will happen in March. He will be an unrestricted free agent again at that point unless the Steelers manage to re-sign him by then, and if he winds up somewhere else—somewhere where 65 is available—you can bet he’ll jump at it.