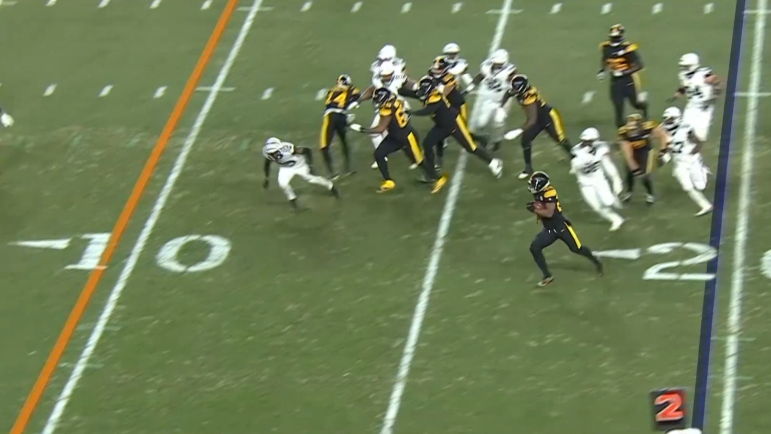 Yes, the Steelers’ offense scored 50 percent more points yesterday than they have in any other game this year and they still managed to lose. While the defense obviously wields a ton of blame for that, the offense isn’t about to absolve itself, especially following a poor second half. But running back Najee Harris still sees something to grow from.

“There’s a lot of good stuff we put on film,” he told reporters after yesterday’s game via the team’s website. “Obviously we scored points. One time we were 5-for-7 on third down. We’re building from there. We scored 30. It was our first time all season scoring 30.”

It’s nice and all, as far as it goes. It was even a good game for Harris individually, rushing for 90 yards on 20 carries with two rushing touchdowns, adding four receptions for another 26 yards after rushing for 99 on 20 attempts last week. Yet it doesn’t change the outcome.

The drive to which he was referring was the first full possession in the fourth quarter, which began with great field position at the Bengals’ 47 and which Harris opened with a 13-yard run, about their most successful 1st-and-10 play of the night.

Yet tight end Pat Freiermuth was flagged for holding on the next play. That was followed by a miscommunication between Harris and quarterback Kenny Pickett, the quarterback expecting a draw but having nobody to hand off to. He was forced to throw, and by then center J.C. Hassenauer was already ineligibly downfield. Suddenly it was 1st and 25 and they weren’t going anywhere.

It was just a four-point game at that time. They had a chance to retake the lead. Instead, they squandered the field position, and in the ultimate display of the absence of complementary football, the defense turned around and allowed the Bengals to drive the field 93 yards for an eight-play, five-minute touchdown drive that put the game out of reach. That was certainly the turning point in the game, even if it doesn’t absolve them of the complete abomination of four straight three-and-outs in the third quarter.