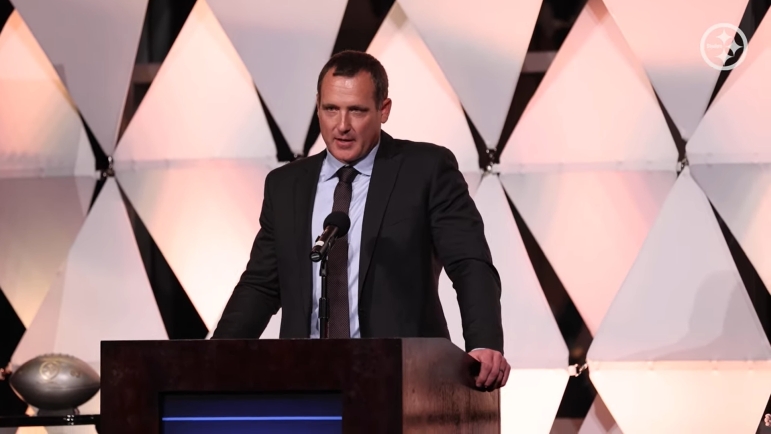 It was a good day for the Pittsburgh Steelers overall. Not only did they get back T.J. Watt in a victory that was spurred on by a resurgent run game, it also saw the inauguration of the Hall of Honor class of 2022. And fan favorite tight end Heath Miller was the headliner, giving a speech to a small audience prior to the game.

Because the football game understandably overshadowed the proceedings—even as of this writing, the video of his speech on the team’s YouTube channel only has 1.4K views—I wanted to put some attention to it now and highlight what he had to say.

“It was to be the best and to strive for greatness”, he said, “but more than that, it was to do it with a tough, hard-nosed, blue-collar mentality, and that suited me perfectly”.

The Steelers’ 2005 first-round draft pick, Miller rarely put up what would be considered by today’s standards ‘Pro Bowl’ receiving numbers from the tight end position, but you would be hard-pressed to find a more complete player in his role in that era.

While he still finished his career with nearly 600 receptions for 6569 yards and 45 touchdowns, so much of his value was in his selflessness. That’s not just about blocking, but in opening up lanes for others, just generally doing whatever was required to contribute to victory. And he did it in part because he knew the legacy before him.

“I strived to be the best, and I wanted to do it the Steeler way. I wanted to earn the respect and trust of my teammates”, he said. “I wanted the guys who came before me in Pittsburgh to respect and be proud of the way that I and we as a team played the game.”

“When they watched us play, I was hoping that they would look at us with a nod of affirmation and say, ‘He’s a Steeler’”.

I think we can safely say that he accomplished that and then some. He is universally regarded as the greatest tight end in Steelers’ history. And perhaps my favorite thing of all is the fact that he is embracing his own part of the lineage.

Already he has forged a relationship with the team’s latest tight end, 2021 second-round pick Pat Freiermuth, who gave Miller and former quarterback Ben Roethlisberger big hugs prior to yesterday’s game. The two tight ends have had the opportunity to share a few moments already, and I’m sure Miller will continue to follow his career and offer advice when sought.