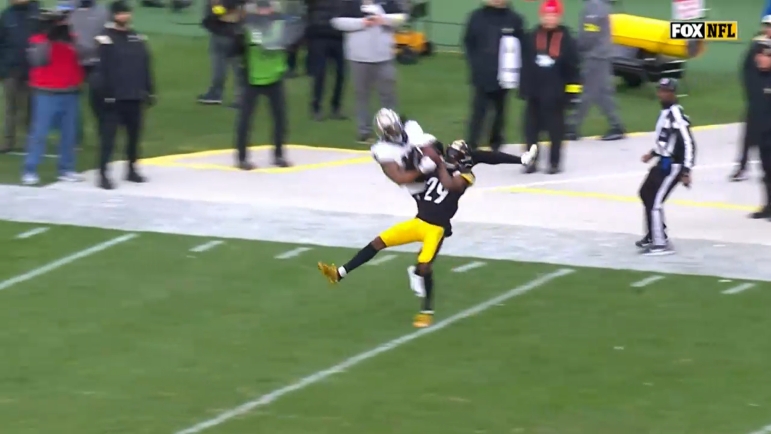 Even without the services of star safety Minkah Fitzpatrick (appendectomy) and linebacker Myles Jack (knee) Sunday against the New Orleans Saints, the return of star outside linebacker T.J. Watt and veteran safety Damontae Kazee helped the Steelers do something they hadn’t done in three games: create turnovers.

Two key interceptions on New Orleans quarterback Andy Dalton and a crucial fourth-down stop on a failed quarterback sneak helped the Steelers pitch a shutout in the second half on the way to a 20-10 win, improving to 3-6 on the season.

What a pick by Levi Wallace! @steelers

Kazee made his presence felt right away with a huge hit on rookie receiver Chris Olave (though it drew a penalty) and later added an interception off of a deflected pass, while cornerback Levi Wallace picked off Dalton on a deep shot down the right sideline. Later, Robert Spillane helped the Steelers force a turnover on downs, sparking the Steelers defense in the win.

Speaking to reporters after the game, Watt — in his return — highlighted the splash plays the Steelers created Sunday defensively, crediting the atmosphere inside Acrisure Stadium for creating a hostile environment, leading to some of the splash from the Steelers, especially on the quick count on the failed quarterback sneak.

“It’s huge. I mean we always talk about wanting to create splash here and we need splash,” Watt said to reporters following the win, according to video via the Steelers official Twitter page. “We need to continue to do it and it’s something that we’re always hunting. But, it comes with creating an incredible atmosphere and that’s what we had today.”

The Steelers certainly had an incredible atmosphere Sunday with the return of Watt and the first game back after a much-needed bye week.

Fans were revved up right from the start with Watt’s introduction defensively. That atmosphere continued throughout the game, and following a 33-yard field goal from Matthew Wright and a well-timed playing of “Renegade” the Steelers forced a turnover with Kazee taking advantage of the pass that bounced off of Jarvis Landry’s hands with Wallace in tight coverage.

Eight plays later, the Steelers turned their first defensive splash play in three games into a Kenny Pickett 1-yard rushing touchdown and a 20-10 lead. A turnover on downs and an interception on the next two Saints drives helped the Steelers defense close out the much-needed win.

Relatively healthy at this point in the season and with one of the best defensive players in football back in uniform and being that game-wrecker he’s always been, the Steelers defense should be able to hunt splash plays once again, which could lead to the black and gold stacking wins in the second half of the season.