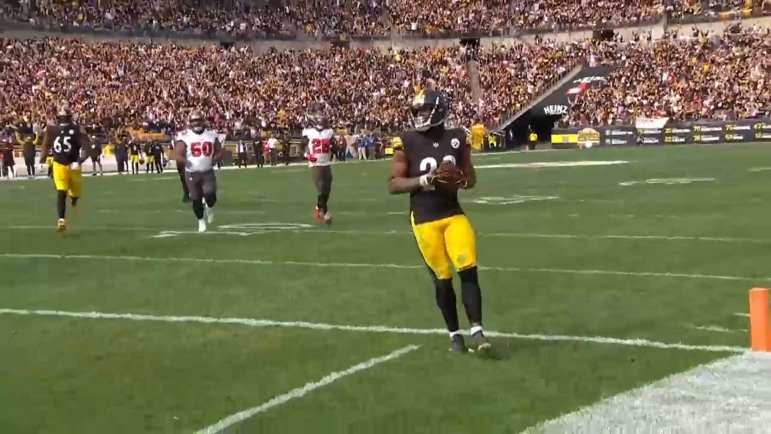 While Najee Harris and the Pittsburgh Steelers need to improve their running game, Harris also believes the team’s running backs can get more involved in the passing game, too. Speaking to reporters Friday, he floated the idea of using him and others more often on designed pas routes.

“I talked to them and thought we should run more routes out of the backfield from a running back standpoint,” he said via The Trib’s Joe Rutter.

While Harris’ rushing numbers have fallen off midway through the 2022 season, his receiving impact has cratered too. As a rookie, he caught 74 passes, a franchise-record for a first-year player, for 467 yards and three touchdowns. He’s found the end zone through the air twice this season but has only managed 24 receptions for 112 yards, on pace to finish the year with 51 grabs for 238 yards. Like the rest of the Steelers’ receivers, Harris’ average has shrunk compared to a season ago. He hasn’t had more than 40 yards receiving in a game this season after doing so three times as a rookie.

Pittsburgh hasn’t been a solid screen team in years so it’s doubtful that’s the ticket to get Harris more chances in the passing game. But the team could toy with the idea of flexing him out more often. According to our Steelers Depot charting, Harris has hardly been split out wide this season. Here’s his wide receiver-alignment rate in 2021 compared to 2022.

A dramatic difference. Harris is no longer the team’s third down back, partially explaining the decrease (64 of his split-out snaps a year ago came on 3rd down) but it certainly isn’t the sole cause. Pittsburgh has made Harris into more of an old-school runner, an early down type who lines up next to or behind the quarterback and that’s about it. Jaylen Warren also hasn’t seen much time at receiver though that’s less in his wheelhouse.

Harris was drafted as the do-it-all running back who certainly brought great receiving chops. Over his final two years at Alabama, he caught 70 passes on a Crimson Tide team that didn’t always have to pass the ball while playing alongside some great wide receiver teammates who commanded the football. Players like Jerry Jeudy, Devonta Smith, Jaylen Waddle, all players worthy of the football and yet Harris still found a way to be an impact player in the passing game. So Harris’ suggestion to the Steelers’ coaching staff is a wise one though it remains to be seen if the coaches will take his advice.

The New Orleans Saints are without top linebacker Pete Werner which on paper, could make Harris a better matchup. But like everything else about the Steelers’ offense, it remains a good theory only and yet to be something that’s been successfully put into practice.