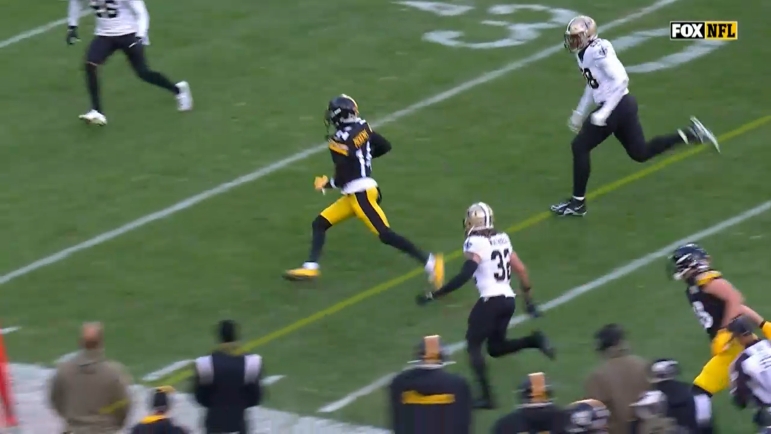 One of the questions that players on the Pittsburgh Steelers offense were continually asking even in front of the media, or at least raising, was what their identity was. Multiple players, while not condemnatory, questioned whether or not they even had one.

For many reasons, it might not have come as a shock to find those questions about this offense coming into the 2022 season given how much had changed since the year before. But at least many figured they could count on the run game being a focal point, including the free-agent pickups along the offensive line.

Well, perhaps they’ve finally begun to get something going coming out of their bye. They rushed for over 200 yards, their most in a game since 2016, and recorded four explosive runs, of which they had none going in.

Notably, they did it in a variety of ways, including quarterback scrambles, but also wide receiver jet sweeps and even fullback dives. Plus a bit of Wildcat. “We’re trying to focus more on that”, starting running back Najee Harris said of getting production out of the running game through variety and creativity, via the team’s website. “I think it is. I think it’s kind of our identity, too, as an offense. We’ve got to try to bring it out a little more”.

The Steelers running sweeps with their receivers obviously isn’t new. It’s been a prominent part of their offense since 2020 when Matt Canada, then nominally the quarterbacks coach, was first hired. It’s something he’s focused on as offensive coordinator the past two seasons.

Now with a mobile quarterback under center, he’s been able to rely upon that as another supplement to the run game, and one that he hopes can make it easier for the other facets of their ground attack to function, particularly for the running backs.

Even if it means giving them the direct snap sometimes, which Harris indicated they’ll be doing more of. “It opens the package, obviously, for a lot of stuff”, he said of the Wildcat. “You could pass, you can do a lot of stuff with it. you can expand it to do a lot of other things, too. That’s just another look for defense to gameplan against”.

At the end of the day, I’m in favor of whatever works, so if they do run it more, I’m just going to hope it works, or at least that it doesn’t end in a disaster. They had some effectiveness with Le’Veon Bell running the Wildcat some years ago.

But the broader point is that it’s just another way the Steelers under Canada are trying to carve out yards on the ground. whether it’s a traditional run between the tackles, power, inside zone, outside zone, wide receivers on sweeps and reverses, fullback dives, quarterback sneaks, scrambles—perhaps even designed option runs—whatever works, they’re gonna keep doing.