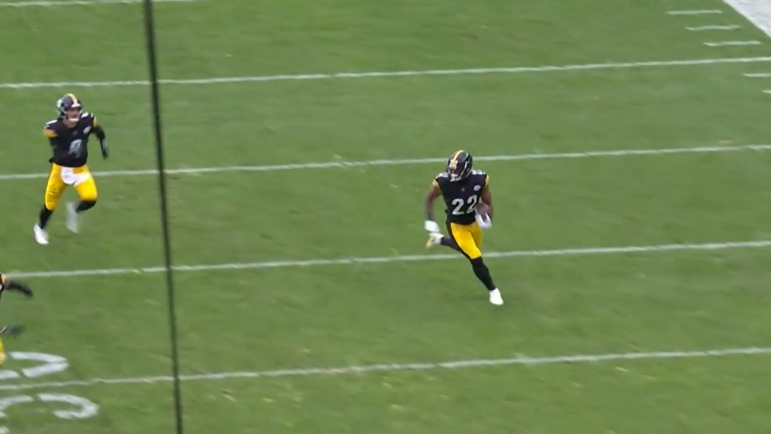 Heading into the Week 10 matchup against the New Orleans Saints, a lot of attention offensively was on the dynamic in the backfield between second-year pro Najee Harris and rookie undrafted free agent Jaylen Warren.

Warren, to his credit, had earned more and more opportunities in previous weeks, while Harris struggled throughout much of the 2022 season and seemed to be losing his grip on the lion’s share of the snaps.

Entering Sunday’s matchup, doubt was starting to creep in from the outside regarding Harris, at least from the media and fanbase’s perspective. Harris took a much-needed step towards silencing that doubt Sunday against the Saints, rushing for a game-high 99 yards on 20 carries, including a season-long of 36 yards — one yard off of his career high — in his best game of the season.

The 36-yard run came in the first half in which he ran through a New Orleans defender, bounced to the outside and ripped off the chunk play. That run, according to rookie quarterback Kenny Pickett, sparked the Steelers offense early and set the tone in the run game for the black and gold.

Kenny Pickett addresses the media following our win against the Saints. pic.twitter.com/c7mYmdvar9

“Yeah, it gave us that spark early in the game. We jumped up on a lead. Wish we could have put this one away a lot earlier, but I think that play really sparked the offense,” Pickett stated to reporters after the win, according to video via the Steelers official Twitter page. “We were getting behind Najee and we felt great with how he’s been practicing and everything, and he came into this game with a lot of confidence and it showed.

“The o-line did a great job as well, so I think they complemented each other well.”

Already holding a 7-0 lead, the Steelers leaned on the run game on the third possession of the game. After being bailed out by a questionable roughing the passer call on a throw from Pickett intended for Diontae Johnson down the right sideline that wasn’t even catchable, the Steelers had new life on a drive that appeared to be headed for a punt.

Two plays after the penalty, Harris got loose and rumbled 36 yards downfield for the explosive run, setting the Steelers up in scoring position.

Left tackle Dan Moore Jr. did a great job creating a crease for Harris, and Pickett even got involved on the play, racing downfield to try and throw a block for Harris.

“I was trying, man,” Pickett said to reporters when asked about being downfield trying to block. “When I thought he was gonna get tackled and I saw him pop up, I was like, ‘he might be gone, so I gotta go get a block.’ He almost made it, but yeah, it was an awesome play.”

It was the type of play the Steelers have been waiting for this season from Harris, and it was a clear sign that the message from running backs coach Eddie Faulkner and head coach Mike Tomlin resonated with the second-year running back over the bye week. It also showed how much of a gamer Pickett is, willing to do whatever it takes to win.

It provided a spark and helped set the tone the rest of the way for the run game from the black and gold.