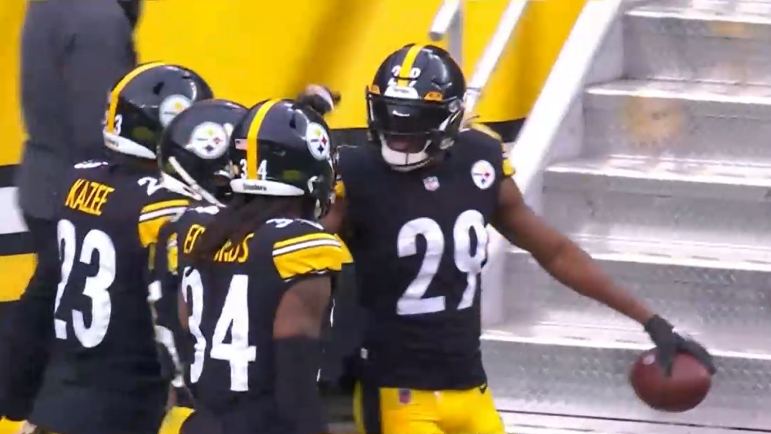 One or the other. Levi Wallace only has two interceptions this season to choose from but his pick in Sunday’s win over the New Orleans Saints is easily his favorite on the season. It came in a big moment as Pittsburgh shutout the Saints’ second half offense to preserve a 20-10 win, netting their third victory of the year.

Talking with reporters after the game, Wallace said that play wasn’t luck but something he’d been actively practicing.

“That one felt good,” he said via the team website. “Got two on the year now that’s probably my favorite one thus far. I practiced getting my head back around and locating the ball and so I took a risk pressing it.”

Wallace’s pick came late in the fourth quarter. With Pittsburgh up 20-10, Saints’ QB Andy Dalton threw deep down the right sideline for WR Kevin White. But Wallace made the play, getting his head around and finishing it with the interception. Pittsburgh’s offense did the rest from there, closing the game out with a strong four-minute offense and never giving New Orleans the ball back.

While there was a risk, Wallace said game circumstance gave him the confidence to make the play.

“It was late in the game. Kind of knew that they were gonna try to throw the deep ball. I don’t shy away from those opportunities and so I wanted it and I took it from them.”

Wallace’s first INT came against his former team, the Buffalo Bills, another nice snag in the end zone while that game was relatively competitive. But this one comes in a win, not a 38-3 loss, and is so much sweeter. Pittsburgh’s corners made 1v1 plays they hadn’t for most of the season prior to this. Wallace was the full-time starter with Ahkello Witherspoon out and newly acquired William Jackson III on IR, now out the next three games with a lingering back injury.

As DC Teryl Austin likes to say, players don’t magically get better at their craft. It comes with work, with effort, with practice. That paid off in a big way for Wallace and for this Steelers’ defense, who held a Saints’ offense capable of putting points on the board totally in check in this game. Aside from a two-minute drill TD to TE Juwan Johnson, the Saints did little right offensively and Pittsburgh won situations big and small. They played especially well in situational football, New Orleans going a combined 3-13 on third and fourth down in this game.