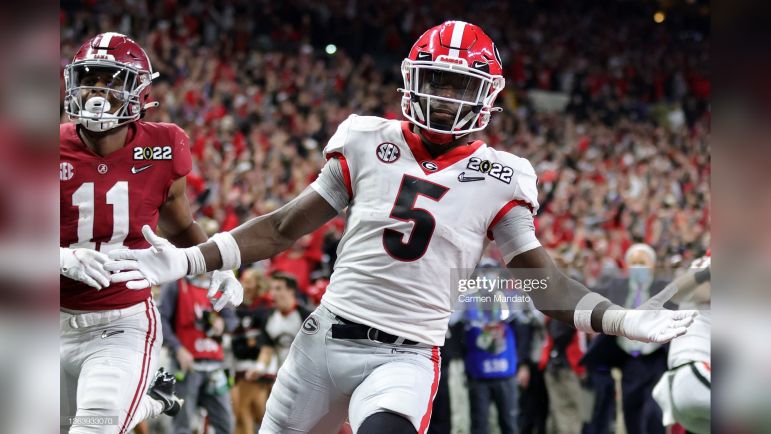 With the Pittsburgh Steelers currently sitting at 3-7, many have already set their sights on next year and specifically what the 2023 NFL Draft may have in store for a Steelers team that is projected to have their highest pick in decades, currently sitting at #8 overall. Things can change and Pittsburgh can pick up more wins to drop their current draft slot, but it’s never too early to go through mock draft scenarios and project player/prospect fits who the Steelers may be interested in given their current needs on the roster and the talent in this upcoming draft class.

Analysis: Kelee Ringo has been touted as one of the top CB prospects in the nation prior to the start of the 2022 season after being a key piece on the dominant Bulldogs defense last season which helped them win a national championship. Ringo returned for his junior season and has been playing well as of late after a quiet start to the year, playing 387 snaps in coverage without allowing a TD in coverage according to Pro Football Focus. Ringo has all the physical tools you look for in a prototypical outside CB and will have the opportunity to become Pittsburgh’s CB1 for 2023 and beyond.

Analysis: Pittsburgh faces tough decisions along the defensive front with Tyson Alualu, Larry Ogunjobi, and Chris Wormley all scheduled to hit free agency this offseason. Instead of bringing back multiple veterans on contract extensions, they could opt to inject more youth upfront with a player like Baylor’s Siaki Ika. He’s a mountain of a man, standing 6’4″, 358lb and plays like an immovable object against the run thanks to his size and strength yet is surprisingly nimble on his feet for tipping the scales over 350lb.

Built in a similar mold to Vita Vea of the Buccaneers, Ika came over from LSU when HC David Aranda took the job to become the man in the middle for the much-improved Baylor defense. Ika can be a starting NT Day 1 in the NFL with the pass rush upside to become a foundational piece on a defensive line.

Great to see #Baylor NT Siaki Ika officially invited to the Senior Bowl. One of the few true nose tackles in this years class. He will transform a teams run defense from Day 1. Provides plenty as a pass rusher too. Solid athlete for 6-4, 355 pounds.pic.twitter.com/zg3fJXYWJH

Analysis: Pittsburgh should beef up both trenches on the offensive and defensive sides of the football and do just that by selecting Notre Dame’s Jarrett Patterson with their second second-round selection. The 6’4″, 310lb redshirt senior is a four-year starter and team captain, having started 34 games at center but has moved to guard in 2022 after missing time in spring ball due to a torn pec that he has since fully recovered from.

He has excelled in his transition outside from the pivot, showcasing a strong anchor in pass protection along with the size and strength to get a push up the middle in the running game. Patterson is one of the steadiest, most consistent IOL in college football and would be a safe floor pick that could provide consistent play at center or guard.

Analysis: The Steelers double dip on the offensive line on Day Two, drafting another proven center prospect Olusegun Oluwatimi out of Michigan. The 6’3″, 307lb redshirt senior transferred from Virginia this spring and started 35 games at the pivot position. He has helped stabilize a talented Michigan offensive line, having fluidity in pass protection to protect the interior while moving DL off their spot in the Wolverines’ dynamic rushing attack. RB Blake Corum can thank Olusegun Oluwatimi and the rest of his OL for a breakout 2022 season as the center can pull and climb to the second level to pick up defenders, giving RBs plenty of open room to run. Drafting Patterson and Oluwatimi would give Pittsburgh two C/G capable players to stabilize the interior OL.

Analysis: The Steelers desperately need to add EDGE depth behind T.J. Watt and Alex Highsmith to bolster the pass rush rotation and provide a reasonable replacement should either starter miss any time. OLB Nick Herbig looks to be the next Badgers pass rusher that will make the transition from the college game to the pros. He posted nine sacks last season and is near the top of college football with 11 sacks in 2022.

He plays with great effort and relentless pursuit of the passer, having good bend around the edge along with a clean dip/rip move at the top of his rush. He is a little light in the pants in terms of weight (6’2″, 228lb), but Herbig should be a reliable rotational pass rusher that could end up becoming a starting-caliber defender if he shows he can hold up well against the run at the NFL level.

Analysis: The Steelers currently have both LB Devin Bush and Robert Spillane scheduled to hit free agency this coming offseason. While there is a chance Pittsburgh brings back at least one of them, they should look to add to the room via the draft. Enter Florida’s Ventrell Miller who I had the pleasure of coaching back in 2018. Since then, Miller has developed into a quality off-ball LB, having the aggressiveness, and stopping power to come downhill against the run as well as hold his own in pass coverage. He’s a good, but not great athlete, but has extensive experience and would make for a good depth option next to Mark Robinson as well as provide the team another special teamer.

Ventrell Miller punches the ball out for a forced fumble 😤

One of the best LBs in CFB 🐊 pic.twitter.com/q4Y1r6iYCI

Analysis: The Steelers traded WR Chase Claypool to the Chicago Bears in a deal they couldn’t refuse, nabbing a high second round pick for the underperforming WR. Pittsburgh has a knack for finding receivers later in the draft, and they do so again by selecting Nathaniel “Tank” Dell out of Houston. Dell has been accumulating stats for the Cougars the last two seasons, topping 1,300 yards last season and has followed that up with 103 receptions for 1,354 yards and 15 scores in 2022.

Dell is electric with the ball in his hands, having the elusiveness to make defenders miss in open space as well as the speed and acceleration to generate plenty of YAC after the catch. Dell is undersized by NFL standards (5’10″, 165lb), which will likely affect his draft stock, but for a team needing more explosive plays in the passing game and a player that can create with the ball in their hands, Dell brings that skill set as a receiver as well as a returner to the table.

Houston WR Tank Dell, one of the nation’s most explosive playmakers, very rare change of direction and twitch. Would love to see this dude blue handling the slot and punt returns. I think hits of offense very well. pic.twitter.com/YyykaGqzzU