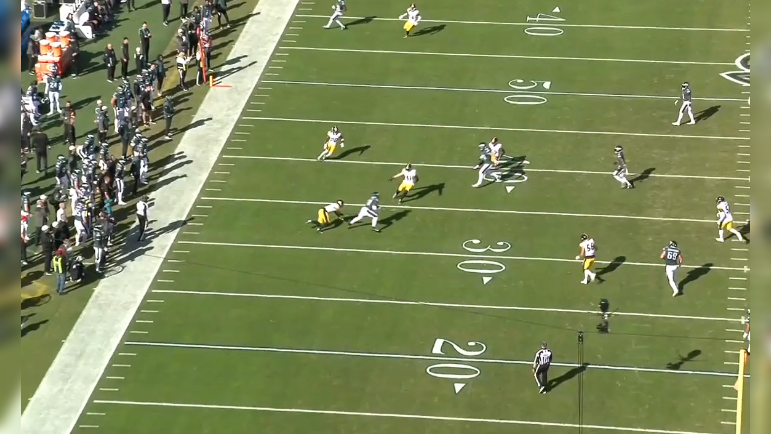 Things were rather ugly Sunday afternoon inside Lincoln Financial Field for the Pittsburgh Steelers against the Philadelphia Eagles.

Ultimately, the Steelers dropped a 35-13 decision in embarrassing fashion as the defense had no answer for star receiver A.J. Brown and the offense couldn’t protect Kenny Pickett, run the football or finish off drives, sending the black and gold into the bye week on a low note.

Eight weeks into the season, the Steelers have a new leader atop the standings in the missed tackles department, and it happens to be promising second-year safety Tre Norwood.

Norwood has played relatively well in a limited role this season for the Steelers, including filling in as a starter due to injury at times. He’s around the football quite a bit, but he’s missing tackles at a concerning rate, especially in space.

Against the Eagles, Norwood played limited snaps overall and recorded a missed tackle in the first half on a check down from quarterback Jalen Hurts to backup running back Kenneth Gainwell in the left flat.

Norwood did a nice job of closing in on Gainwell in space, but he doesn’t break down and take his feet with him to the point of contact for the attempted tackle. I did not give linebacker Robert Spillane a missed tackle here as he didn’t even get a hand on Gainwell in space.

In the third quarter on a key 3rd and 4 near midfield, the Steelers were in great position to potentially stop the Eagles short of the sticks, forcing a punt in a relatively close game at that point (28-13). Instead, a pair of missed tackles in space by leading tackler Myles Jack and backup cornerback James Pierre allowed tight end Dallas Goedert to convert the third down, extending the drive.

Jack gets caught up slightly in the wash with Spillane on the over route from Goedert, giving the Eagles’ tight end just enough space. From there, Jack is in position to make the tackle after a great play by Goedert, but he overruns it, missing the tackle. Pierre is right there to clean it up, but he goes to punch the football out instead of trying to make the tackle, whiffing.

Goedert picked up an additional three yards due to the miss. That might not seem like much, but it was key on a 3rd and 4 as it gave Goedert more than enough to move the chains.

Offensively, the Steelers had a great day in the forced missed tackles department even though they did very little with the football overall. Against the Eagles, the Steelers forced 14 missed tackles on the afternoon, winning the tackle battle by a season-high mark of +10, improving the season record 4-3-1.

For all the hot button debates about second-year running back Najee Harris and his disappointing level of play this season, at least from a production standpoint, the running back continues to force missed tackles at a high rate, doing all that he can to try and produce.

Granted, that’s getting him into the some trouble at times, as we saw against the Eagles on the third down play that he gained no yards on. He’s fighting tooth and nail for yardage though, and he deserves credit for that. He’s not laying down or giving up on any play.

There wasn’t much running room early for Harris against the Eagles, but he tried to make the most of it. This run in the second quarter was a great example of what he was facing early in the game.

To his credit, he’s able to force two defenders to miss in space, allowing him to fight to get back to the line of scrimmage, avoiding the tackle for loss.

He’s not playing very well right now, but he’s going to continue to fight for every blade of grass that he can. That’s all anyone can ask for in this run game.

Though the Steelers traded him away to Chicago Tuesday for a second round pick, it was great to see wide receiver Chase Claypool use his size and strength on his 25-yard catch and run Sunday, dragging defenders with him.

When he’s engaged and really playing for something, he’s a good YAC guy. He showed that here, barreling through some Eagles defenders to move the chains on a 1st and 20 after a Steelers penalty.

For Claypool’s sake moving forward, hopefully there’s more where that came from. I’m still rooting for the guy.

Finally, Jaylen Warren closed the blowout loss out nicely in the fourth quarter.

He continues to run hard and is making defenders miss, which is a huge positive. He deserves some more touches, whether that’s as a runner or a receiver.

His speed and power is becoming very, very hard for defenders to deal with, regardless of whether that’s in garbage time or not.