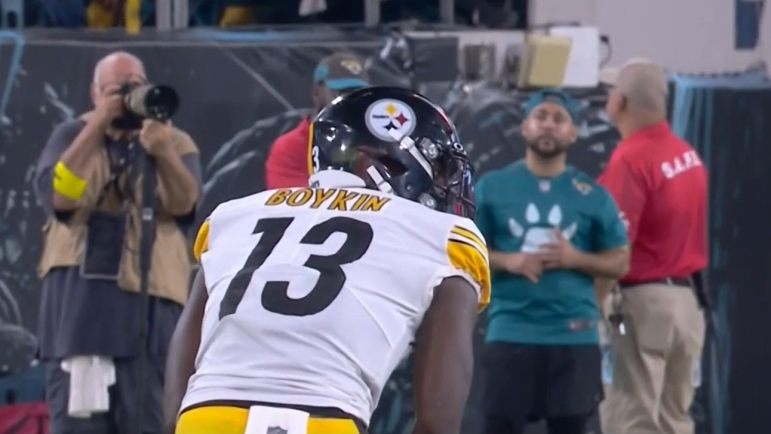 The Pittsburgh Steelers couldn’t turn their noses up to the Chicago Bears’ offer of a second-round draft choice just ahead of the trade deadline a couple of weeks ago in exchange for third-year wide receiver Chase Claypool.

This is not an organization that is in the habit of diminishing their chances of winning in-season, which is why it marked the first trade away of a non-disgruntled player who wanted to be traded in about three decades.

While the future second-round pick is nice, of course, the team’s present task is figuring out how to occupy the snaps and targets and touches that Claypool as a starting wide receiver was seeing this season. It’s been a committed approach so far, including a good helping of two-tight end sets.

But the focus for most people is on the wide receivers, and all three of the reserves got on the field. Steven Sims played 32 snaps on Sunday, Gunner Olszewski 22, and Miles Boykin 14. The three of them combined for four touches for 21 yards, but it’s a feeling-out process. And Boykin is embracing that unknown.

“Absolutely. When I came to this team, I knew that whatever role they had for me that I was gonna do it to the best of my ability”, he told Mike Prisuta this past week, “and I feel like I’ve done that to this point in my career here. I’m just excited for what the future holds, excited for each game”.

A former third-round draft pick in 2019 by the Baltimore Ravens, the Boykin came to the Steelers via the waiver wire after he was cut. He’s dressed for every game but has only played 51 offensive snaps, with one catch on two targets for 11 yards. But more importantly, he’s played 131 snaps on special teams, which is what he has been asked to do first and foremost.

That’s a part of the ‘whatever role they had for me’ that Boykin mentioned earlier. He came into this knowing full well that he was going to be expected to contribute on special teams. So far he is looking like the best gunner that they have had since Darrius Heyward-Bey.

The Steelers scouted and valued him coming out of Notre Dame back in 2018, seeing him and Claypool on the same tape, coincidentally enough. I’m sure they still believe there is more that he can contribute than he has been given the chance to thus far. They still have another eight games to figure out how and when to get their different contributors involved, including Boykin and the other wide receivers behind Diontae Johnson and George Pickens.