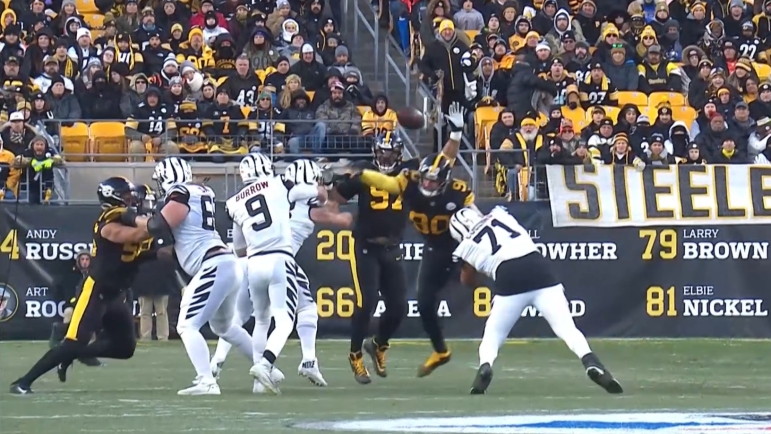 The Pittsburgh Steelers are coming off yet another disappointing loss, this time at home to their rival Cincinnati Bengals. After playing spectacular in the first half, in what was arguably their best of the season, the wheels fell off the bus in the final 30 minutes. There were lots to be upset about on both sides of the ball, but guess who came to play yet again? Reigning Defensive Player of the Year, TJ Watt.

Midway through the third quarter, Watt intercepted Bengals QB Joe Burrow once again right at the line of scrimmage, almost mimicking his Week 1 interception. He jumped up and snatched a low throw by Burrow, even drawing praise from QB himself after the game. This gave the Steelers the ball in great field position, however it only resulted in three points. Another tough blow offensively, in what could’ve changed the game in the Steelers favor.

Coach Mike Tomlin was asked on The Mike Tomlin Show via the Steelers YouTube channel earlier today about the interception, and if he’s ever seen anyone do it twice.

“We see it virtually every week. It happens quite often on the practice field. And not that we don’t appreciate it, but I don’t believe any of us are shocked by it. It’s a skill set that he has, that shows up consistently. It’s unique.”

Watt has for sure shown this consistency during his six-year tenor in the Steel City, racking up an astonishing 73.5 sacks over the course of 80 games. Combine that with all of the tackles for loss and batted down balls he’s had, Watt has truly been a difference maker each year for this Pittsburgh Steeler team. The defense, and team as a whole definitely felt an empty void during his seven-game absence to begin the season.

“It’s no different than a deep ball receiver or sack master or you know, people that bring skills to the game,” Tomlin continued, “That is an awareness and skill that he displays routinely and when it occurs, I don’t think any of us are shocked by it.”

It’s probably safe to say Watt will one day go down as one of the best Steelers ever, and as long as he’s on this team Pittsburgh will be competitive. You can feel the energy shift every time he’s on the field, as it seems the team has this different spark when he’s out there. The Steelers travel to Indianapolis this Monday night to face the Colts, where Watt will be looking to leave an impact once again.