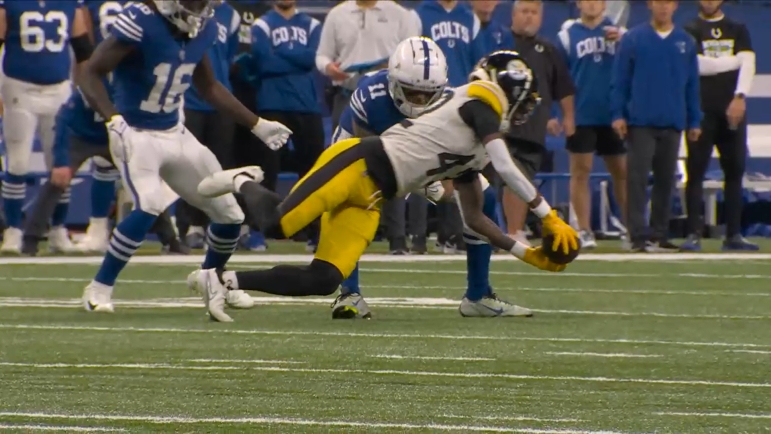 Like the life of most young cornerbacks, James Pierre’s had an up-and-down career. Taken his lumps, made plays, shuffled in and out of the lineup. While it felt overdue for him to again see the field, Pierre got an another opportunity in Monday night’s win over the Indianapolis Colts and made the most of it. Pierre started the game off with an interception, jumping an inside route, and setting the done for a stellar defensive first half.

Speaking to reporters Tuesday, Mike Tomlin discussed Pierre’s growth on and off the field.

“It’s just not too big for him,” he said via the Steelers’ YouTube channel. “There’s a steadiness in him that may have not been there before. It’s probably reflected more than anything in levels of communication. Conversations you can have with him in-game. He’s present, he’s aware, he can articulate the things he’s seeing. I think it’s where he is relative to where he’s been.”

Here’s another look at the interception. Initially at RCB on the outside, Pierre jumped the inside throw to Colts’ WR Michael Pittman, who had pushed off on Cam Sutton. Pierre made a nice catch to pick the pass off and though the Steelers’ offense couldn’t capitalize, it took away a possession from Indianapolis.

Pierre’s playing time has been hot-and-cold all season long. He didn’t see a defensive snap until Week 5 and then was called upon to start in Week 6 against Tampa Bay when the Steelers’ secondary was depleted by injuries. Pierre and the entire Pittsburgh secondary stepped up and played well in an upset win. But when the group got healthy, Pierre was moved back out of the lineup and didn’t log a single defensive snap in the two games after Pittsburgh’s bye week.

After the team’s secondary was torched against the Bengals, Pierre returned to sub-package football last night, playing 30 snaps. Though he gave up a touchdown to Pittman later in the game, he was physical and seemed to put in another quality performance. All of that’s expected for a third-year corner who had predictable woes earlier in his career but seems to be turning the corner and growing his game.

Pierre’s done all he can to prove he should receive consistent playing time going forward. Pittsburgh’s done all they’ve could to limit those chances, using Arthur Maulet in an everydown role, trading for William Jackson, but Pierre’s play warrants a longer look to not only help the team win in 2022 but beyond. Cam Sutton is a free agent after the year, Jackson is unlikely to be retained, while Ahkello Witherspoon is a potential cap casualty. The more the team learns about Pierre, the better, and he’s an asset, not a liability, to the team’s defensive efforts.