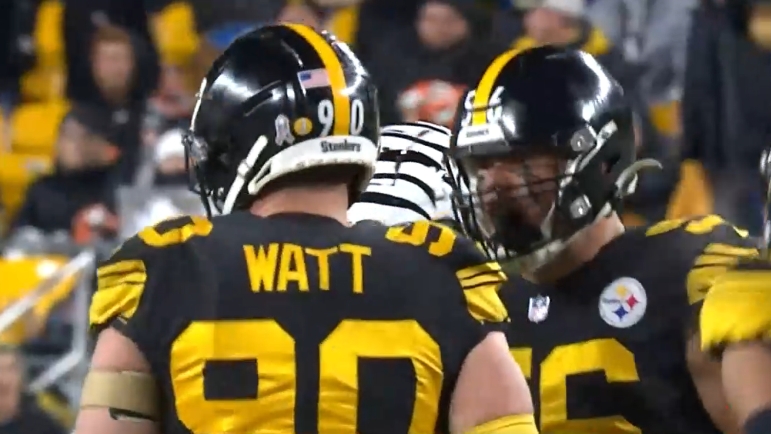 Without the services of star outside linebacker and reigning Defensive Player of the Year T.J. Watt, the Pittsburgh Steelers defense lacked overall bite, including the ability to get after opposing quarterbacks and disrupt offensive drives.

In the eight quarters Watt has played since his return from the Reserve/Injured list from a pectoral injury he suffered in the first week of the season, Watt has returned to that disruptive player, one that opposing offenses are game planning for week to week.

Though he has not fully changed outcomes of games like he normally has in the past, Watt is still that dynamic player overall, according to head coach Mike Tomlin.

Speaking with reporters Tuesday during his weekly press conference, Tomlin praised Watt for his play in his return, but added that it’s nothing new with the All-Pro defender, stating that the he’s seen “typical T.J. stuff” in the two games he’s played in since his return.

“Typical T.J. stuff. He’s playing at a high level, he’s playing so well,” Tomlin said to reporters Tuesday, according to video via the Steelers official YouTube page. “Alex [Highsmith] has been Defensive Player of the Week since he’s [Watt] been back. He’s gonna find ways to be disruptive, whether they put two people on him, whether they hold him or what have you. I think that’s what elite guys do.”

In his return, Watt has recorded 10 tackles, a half a sack, two quarterback hits, two passes defensed, an interception and five total pressures and hurries in matchups against the New Orleans Saints and Cincinnati Bengals. Though the sack numbers aren’t quite there yet, he’s still making impact plays and drawing a bunch of attention from opponents, allowing others around him to get after the quarterback.

Against the Saints, Alex Highsmith had a dominant game with two sacks and a forced fumble, earning AFC Defensive Player of the Week honors. In the loss to Cincinnati, Cameron Heyward had a big game in the trenches with Watt drawing a lot of attention. Watt’s game could have been bigger if La’el Collins and Alex Cappa — the right side of Cincinnati’s offensive line — were called for clear penalties.

Ben on Watt INT vs Bengals: “T.J., the alien. The funny thing about that is I felt for Joe [Burrow], only because I’ve been there in practice. Like, he and I have played a cat and mouse game many times in practice,” #Steelers #NFL pic.twitter.com/QWzJFerbPn

That’s become the norm for Watt though as teams try to find ways to slow him down week after week.

For Tomlin, it’s something all great pass rushers have to work through, which also opens things up for others.

“I did an off-season study a number of years ago as he [Watt] was moving into that elite status in an effort to have clear conversations with him. I put Von Miller’s career sacks on the reel. I put some elite guys career sacks on the reel. All of their reels work through chips and double teams and tight end body positions and so forth,” Tomlin stated to reporters, according to video via the Steelers official YouTube page. “Top-notch guys, they deal with a lot of things schematically, multiple people holdings, and they’re still top-notch guys and I know that T.J. embraces that component of being him. When we know that those things occur, that creates pure one-on-one opportunity for others and everyone eats because of it. That’s just a function of team football.”

One thing that really stood out Sunday was the physicality with which the #Steelers met lead blockers at the LOS. Watch T.J. Watt here against Hayden Hurst.

If you can't make the play, try and blow up the lead blocker. Seeing more and more of it from the defense this season. pic.twitter.com/tRRDepqP0m

That’s largely been the key as to why the Steelers have been so dominant over the years getting after the quarterback. When one guy is so dangerous and draws a bunch of attention from a pass rushing standpoint, it opens things up for teammates, which is key for the Steelers as guys like Heyward, Highsmith and Larry Ogunjobi have enjoyed one-on-one opportunities when Watt is on the field.

Through eight quarters of action in his return, Watt has been disruptive, but he’s still trying to get his legs underneath him. Once he does, look out.