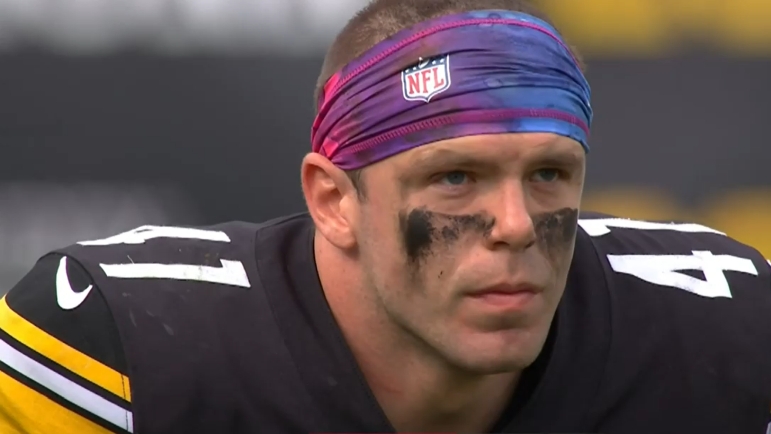 Linebacker Robert Spillane has been coming up a lot as the subject of questions and comments since Sunday’s game, in which he started while the Pittsburgh Steelers held out Myles Jack due to a bothersome knee for precautionary reasons.

He did play well overall and even made some impact plays here and there. It’s probably the best that he has looked over the span of an entire game over the past two years, though he has always had a defensive role in the defense whether starting or not.

He attributes much of his performance to both his physical and mental preparation, though the latter is probably acknowledged more than the former. The grandson of a Heisman Trophy winner and a star on a marginal high school team turned into a winner by a second-generation coach—and a former running back—he has always been a student of the game.

But does that mean he should be coaching anytime soon? Head coach Mike Tomlin is not about to rush any of his players—many of whom may harbor aspirations of continuing their football path into coaching one day—off the field and onto the sidelines.

“We have a lot of guys with that mentality and maybe those aspirations. I tell each and every one of them don’t quit their day job, man,” he told reporters yesterday via the team’s website. “There’s more money in playing.”

He is largely joking, of course, and has had no problem fostering the budding careers of former players. He’s had plenty of them in as coaching interns, for example, such as Hines Ward, Ike Taylor, and even Alan Faneca. And he’ll never turn away a football mind.

“As a coach and somebody that loves football, you appreciate that shared spirit,” he said. “I’m honored to have had guys that have come through this program that are coaches in the National Football League and doing a heck of a job at it. It’s cool to be a part of their growth and development in terms of the game and knowing the game from an outside-the-helmet perspective.”

I will no doubt fail to compile a complete list, but he does have several players under his watch who have turned to coaching—including Ward, who has coached in the NFL and is currently an XFL head coach with aspirations to return to the NFL. Deshea Townsend, Nick Eason, Larry Foote, Byron Leftwich, and William Gay are others who are or have been coaches in the NFL.

Could Spillane follow that path? I certainly think so. He reminds me a lot of, well, his current position coach, Jerry Olsavsky, who played for the Steelers before coaching for them, and he’s been at the latter job for several years now.

But Tomlin would tell him, make your money now, and worry about coaching later. Spillane is making $2.433 million this season on a restricted free-agent tender. He will have the opportunity to explore the open market for the first time in March.