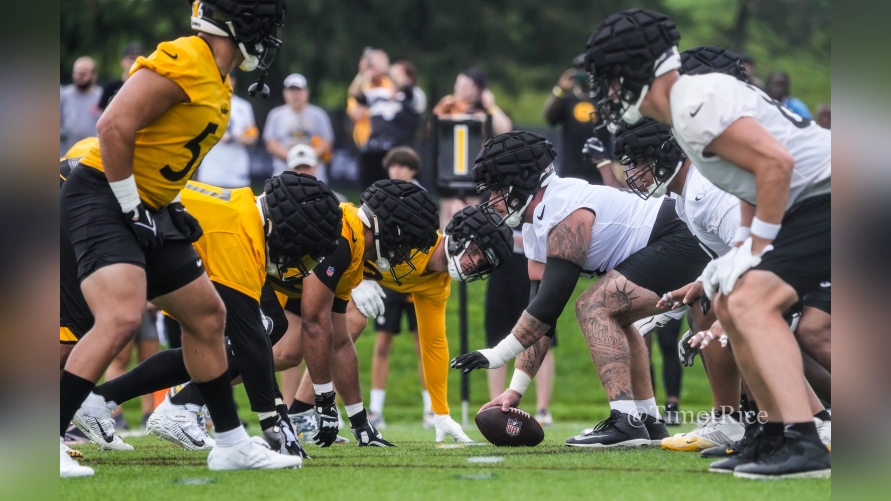 The Pittsburgh Steelers’ offensive line is outperforming expectations this season in most areas. The hiring of Pat Meyer as offensive line coach, as well as the free agent acquisitions of center Mason Cole and guard James Daniels, have culminated in an improvement in pass and run protection for the unit from 2021. However, one area that this unit is struggling with is penalties, as they seemingly commit multiple each game. On a Friday interview according to Steelers.com’s Teres Varley, Cole commented on how the unit can cut down on costly pre-snap penalties.

“It’s a huge emphasis,” Cole told Varley “The big thing for us is not the physical stuff. Holding is going to happen. It’s the pre-snap stuff, the offsides, lining up improperly. We are trying to figure out ways to correct the illegal man downfield. We have had so many penalties this year that we have killed us over and over again. We put ourselves in bad situations. You get behind the chains and defenses tee off on you. It gets tough, especially in this league.”

For context, the Steeler have 9 offensive holding penalties in 2022, which is tied with six teams for 5th highest in the NFL, and has stalled four drives for them. Meanwhile, they have six pre-snap offsides penalties, which is tied with four teams for second to last in the NFL, but has also stalled four drives for them. As Cole points out, the Steelers are also tied with the Miami Dolphins for first place in ineligible man downfield calls with five, costing them three drives and 28 yards.

While Cole is right in that the team must eliminate pre-snap and ineligible man down the field penalties, dismissing holding calls as an inevitable byproduct of physicality may not be accurate. Granted, the former two penalties are far easier to fix on a fundamental discipline level than holding calls. However, the fact remains that the Steelers rank higher relative to the NFL in holding calls far more than they do with pre-snap offsides calls. In fact, the Steelers’ line is only responsible for five of the team’s false start penalties, as receiver Chase Claypool committed one of the six. As such, the focus on cutting down penalties must also consider holding calls.

“We were super critical of ourselves,” Cole continued when asked if the unit is using the bye week to take a deeper look at what the root cause of the penalties is. “Guys know when they mess up too. They know when they false start. You have to be more dialed in, locked in, not overthinking. We have to know what we have to do so when we get to the line of scrimmage, we aren’t thinking about it, so those things don’t happen.”

With an offensive line that is still getting used to playing together, growing pains with penalties are a natural byproduct. However, as Cole stated, they are happening too often and must be addressed at a fundamental level. Notable, Cole is the only lineman in the starting group to not have committed a penalty. Further, the only two offensive lineman for the Steelers to commit a pre-snap penalty are Dan Moore and Kevin Dotson, the former having three and the latter having two. Dotson also leads the team in holding penalties with three, while Moore has two and Chukwuma Okorafor has one. Moore also has an illegal formation call, which counts as a pre-snap penalty.

For an offensive line that is exceeding expectations, penalties at a fundamental level should be an easy issue to clean up. This is a relatively youthful group, with Cole being the veteran of the group at 26 year old. With the extended time off and clear focus on improving upon this, the rate at which this unit commits penalties moving forward will be telling.