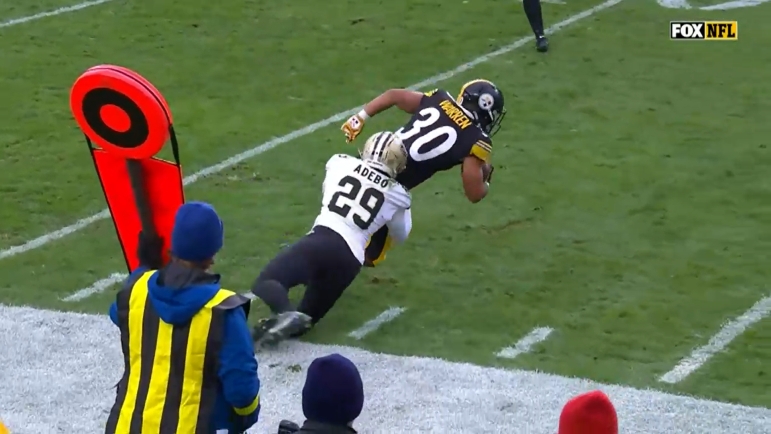 Ahead of the Week 10 matchup against the New Orleans Saints at Acrisure Stadium, the Pittsburgh Steelers placed an emphasis on fixing the running game coming out of the bye week, even if that meant increasing the snap count for rookie undrafted free agent running back Jaylen Warren, leading to a bit of a decrease for second-year starting running back Najee Harris.

On Sunday against the Saints, it didn’t matter who was in the game getting the football on the ground for the black and gold as Harris and Warren carved up New Orleans in the 20-10 win, rushing for a combined 136 yards on 27 carries, helping the Steelers reach 217 rushing yards as a team, the first time they’ve done that in 92 regular season games.

To put things in perspective, today marked the first time in 92 regular season games the Steelers ran for over 200+ yards.

Last instance was December 11th, 2016 against the Bills. #Steelers

The two are a nice pairing overall, with Harris serving as the physical, chain-moving back, while Warren brings the home run speed and overall explosiveness with some power mixed in.

“Yeah, I think it’s a good one to punch, right? You got Najee, this big, powerful back and you’ve got Jaylen, this smaller, seems like quicker back and it’s just a good change of pace,” Cole stated to reporters following the win, according to video via Steelers.com. “And I think those guys play well together and they both do really good things. It’s good to see them both have a lot of success.”

It was great to see not only the Steelers bounce back in a big way from the run game perspective on Sunday, but it was great to see Harris take the message from running backs coach Eddie Faulkner to heart over the bye week. He was a much more decisive, downhill runner against the Saints and used his size to his advantage, especially on his 36-yard run.

Harris turned in his best performance of the year, and with Harris wearing down the Saints to the tune of 99 yards on 20 carries, Warren was able to come in and play off of Harris, rushing seven times for 37 yards, adding a 21-yard burst in the fourth quarter that helped seal the win.

If the Steelers can get those two to continue to play well off of each other and have success on the ground, the offense should be able to take a sizable step forward in the second half. That should be music to everyone’s ears.