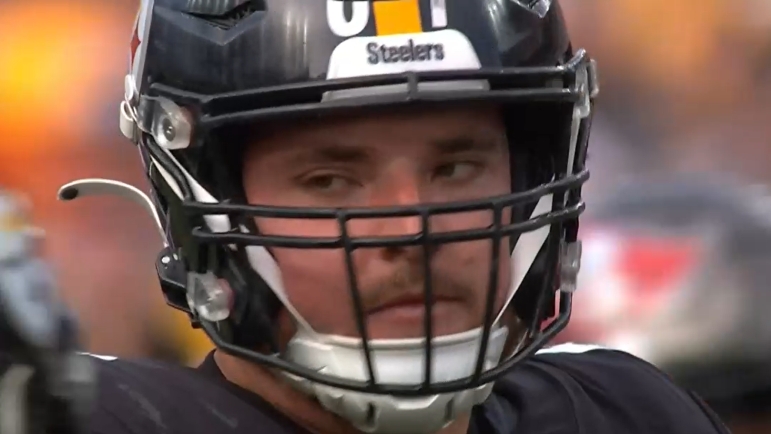 The interest in veteran offensive lineman Mason Cole in free agency from the Pittsburgh Steelers had to do in large part to his versatility on the interior of the offensive line and his overall experience, having playing in 60 career games with 39 starts in his first four seasons in the NFL with the Arizona Cardinals and Minnesota Vikings.

Eight games into his tenure with the Steelers, the franchise may have gotten more than it bargained for with Cole, at least from a leadership standpoint.

Cole, who has missed just five snaps all season, has stepped in as a steady presence for the black and gold offensively. Though his play has been up and down due to a foot injury that’s been bothering him much of the season causing him to miss some snaps, he continues to be out there each and every week, serving as that communication hub — as head coach Mike Tomlin called him — providing a veteran presence for a young Steelers offense.

Quietly, Cole is becoming more and more of a leader each week for the Steelers.

The veteran center is quickly becoming one of the go-to guys in the media this season in the locker room, win or lose. He’s always ready to stand up, take accountability and is honest with the media regarding what’s happening with the Steelers at that given time. At this point in the season, he feels like a shoo-in for the ‘The Chief’ Award, which was established in honor of Steelers’ founder, Arthur J. Rooney, Sr., and is presented annually by Pittsburgh Chapter of Pro Football Writers of America to a member of the Steelers’ organization that best exemplifies the spirit of cooperation with the media that he embodied.

While he’s finding himself as a leader in the locker room, Cole is also emerging as a steady presence on the field, earning praise from Tomlin Tuesday for being “steady Eddie.”

“I think he’s been steady Eddie, not only in performance, but in presence, in communication,” Tomlin said. “He’s a quality veteran football player.”

Second-year offensive coordinator Matt Canada echoed those words Thursday during his weekly media session, crediting Cole for being a positive presence that works hard and is a student of the game for a young offense overall.

“Yeah, he’s been a guy from day one that’s come in. He’s certainly a student of the game, a real positive person, works really hard. He’s here at 6:30 every morning working on what he can do and what he’s going to see,” Canada stated to reporters, according to the official transcript provided by the team. “He certainly leads the guys up front as far as with the calls and those things, as a lot of centers do. Big fan of his, and he does all he can to do his job first and then try to help everybody else with theirs by making sure they’re all on the same page.”

That’s been Cole’s M.O. since entering the league as a third-round draft pick out of Michigan in 2018. He’s played tackle, guard and center throughout his career and has been a great communicator, knowing what every position’s role is on seemingly every play.

That’s helped him become a student of the game in his first four-and-a-half seasons in the NFL, and a valuable leader for the Steelers early on in the 2022 season.

Though his play — at times — has left much to be desired, Cole appears to be a key piece of the offensive line rebuild moving forward, especially from a leadership standpoint alongside right guard James Daniels.