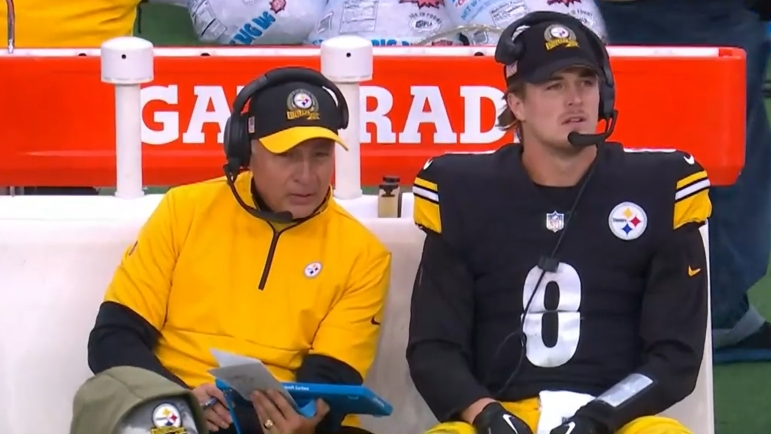 Though his performance throughout his first five career starts has been relatively up and down, one thing the Pittsburgh Steelers are seeing out of rookie first-round quarterback Kenny Pickett is continued growth in key areas of his game.

Coming out of the bye week, the Steelers talked with Pickett about taking better care of the football, utilizing his legs a bit more and showing some continued growth from a leadership and decision making standpoint.

Against the New Orleans Saints in Week 10, that’s largely what Pickett did.

Easily my favorite throw of the day from Kenny Pickett. Does a very good job of reading the field on the rollout, works high to low on the flood concept and fires a dart into a tight window to Diontae Johnson.

More of that, please. pic.twitter.com/YU33POKHm8

According to charting from Pro Football Focus, Pickett had no turnover-worthy plays, and he did a great job of bouncing back from a rather poor first half to put together some key throws in the second half, helping the Steelers move the football down the field into scoring position time and time again.

That display in the stadium and signs of growth has the Steelers and head coach Mike Tomlin rather encouraged.

Speaking with reporters Tuesday during his weekly press conference, Tomlin praised Pickett’s growth and believes that it will continue to trend in that direction moving forward.

That’s what is expected of a young quarterback gaining more and more experience at the NFL level.

Coming out of college, Pickett was considered the most pro-ready quarterback in the 2022 NFL Draft class. He was able to quickly pick up the playbook in Pittsburgh and has a strong command of it at this point in his career, which is a major positive.

Good news is, Pickett bounced back in a big way two plays later. Hobbled after a sack, Pickett throws an absolute dime to Najee Harris on the wheel route. Terrific ball placement between two defenders. Harris has to make this play. Perfect throw. pic.twitter.com/ZhEslqbYr1

He’s already entrusted to make changes at the line of scrimmage, is finding his leadership voice and is really taking control of a young offense that very much remains in the stages of development.

Sunday’s display in the second half was a positive sign of growth for the rookie quarterback, shaking off that poor first half and coming through in big spots when his team needed it the most. He’s a gamer, is committed to his craft and has some of the intangible qualities that makes guys success at the position.

Now, it’s about stacking good days together and continuing to take those positive strides forward from a quarterback’s perspective.