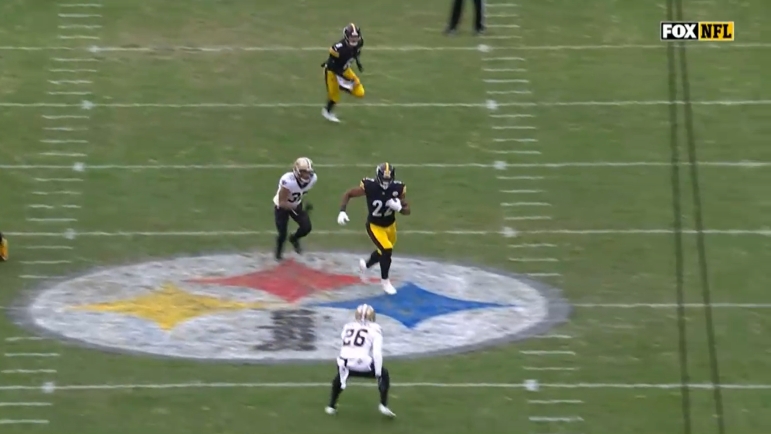 It’s not too often in the NFL that you want to see the starting quarterback and future franchise quarterback looking to put his body on the line as a blocker.

Typically, teams want quarterbacks to just get the heck out of the way, but that’s not in the makeup of Pittsburgh Steelers rookie quarterback Kenny Pickett. A true gamer through and through, Pickett was well behind the line of scrimmage carrying out his play-fake on the 36-yard in the first quarter from second-year running back Najee Harris.

Seeing Harris break into the open field after running through a would-be tackler, Pickett could have stood around and watched the play like the rest of the Steelers offense around the line of scrimmage as Harris raced down field on his first explosive run of the season — and second-longest of his career.

Instead, Pickett does what he normally does as a gamer: he got involved.

Out of nowhere, Pickett came flying into the picture, racing alongside Harris down the Steelers sideline looking to get involved on the play, aiming to spring a block for his teammate in hopes of helping him get into the end zone.

“I was trying, man,” Pickett said to reporters when asked about being downfield trying to block, according to video via Steelers.com. “When I thought he was gonna get tackled and I saw him pop up, I was like, ‘he might be gone, so I gotta go get a block.’ He almost made it, but yeah, it was an awesome play.”

It was a terrific run from Harris, one that the Steelers had been waiting for all season. It was an awesome display of want-to and competitiveness from Pickett as well, which isn’t surprising considering what he’s done throughout his collegiate career at the University of Pittsburgh and through his first five-and-a-half games as the starting quarterback of the Steelers.

While his attempted block on New Orleans rookie defensive back Alontae Taylor was inconsequential, the effort shown on the spring downfield to get in on the play was anything but for the Steelers.

That type of hustle, heart and overall want-to will go a long, long way in the Steelers locker room, especially when they review the film Monday. Hats off to Pickett for busting it down the sideline trying to do whatever necessary to help put points on the board.