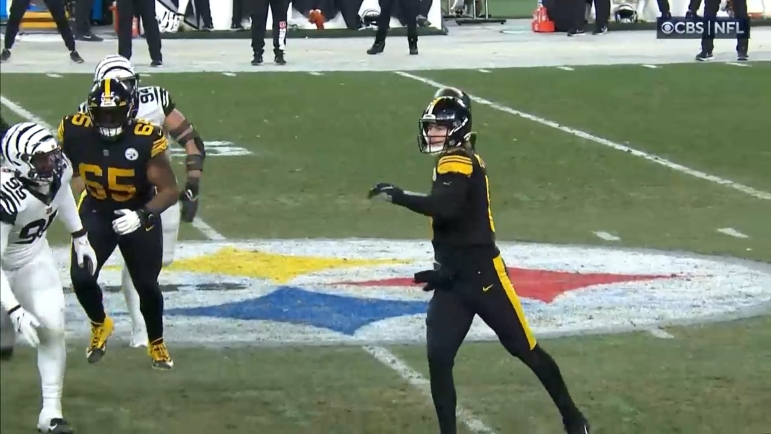 Ahead of the Pittsburgh Steelers Week 12 game on Monday Night Football against the Indianapolis Colts, outside linebacker T.J. Watt went on Rich Eisen’s Monday Night Hotline. Eisen, who calls the Monday Night Game for Westwood One, asked Watt about rookie quarterback Kenny Pickett, and Watt praised his teammate.

Another week, another Watt.

Last week ahead of #MNF we caught up with J.J.; today it's T.J.#PITvsIND comes your way on @westwood1sports tonight at 7:30p ET. pic.twitter.com/4bkxWgQySl

“He’s got some moxie, he’s got some swag. The way that he plays, he’s a go-getter, he’s going to get chances. I think that’s all you can ask for as a defensive player, he doesn’t want to just dink and dunk down the field, he wants to take those chances. It’s so important at this level to be able to get those chunk plays and take those shots,” Watt said.

“Everything I’ve seen from him and I’ve heard from the offensive guys is that Kenny is a guy that you want to play for,” he continued.

While Pickett’s performance hasn’t been the best and his numbers aren’t super gaudy, he’s still a rookie who’s learning how to play in the NFL and he doesn’t even have a full season under his belt. The key for this season is Pickett’s development and building chemistry between him and the rest of the team. If guys want to play for him and believe in him as the starting quarterback, that’s really all you can ask for right now.

As far as taking chances down the field, Pickett has 16 passes that qualify as an explosive play in what’s essentially six games (he came in during the second half of the New York Jets game in Week 4 and missed most of the second half of the Tampa Bay Buccaneers game in Week 7). One interesting nugget is that of Pickett’s 16 explosive plays through the air, seven of those passes have gone to fellow rookie wide receiver George Pickens, who leads all non-quarterbacks on the team with 11 explosive plays (10 receptions and one on the ground). Ideally, the Steelers would like to build that Pickett-Pickens connection, and the other day Pickens talked about the chemistry between the two of them.

So far, Pickett has thrown 8 interceptions this year, but he was turnover-free the last two games, and while he played some bad football in the second half against the Bengals last Sunday, the first half was a glimpse of the type of quarterback he could become when he was 14-19 for 141 yards and a touchdown. Obviously, you want to see Pickett put together a complete game, which he wasn’t able to do last week. But the first half showed he’s capable of being a solid NFL quarterback, and the fact he already has the respect of his teammates for the way he plays and the way he carries himself is important, especially as a rookie. Hopefully, he can have a breakout game on primetime tonight against the Colts.