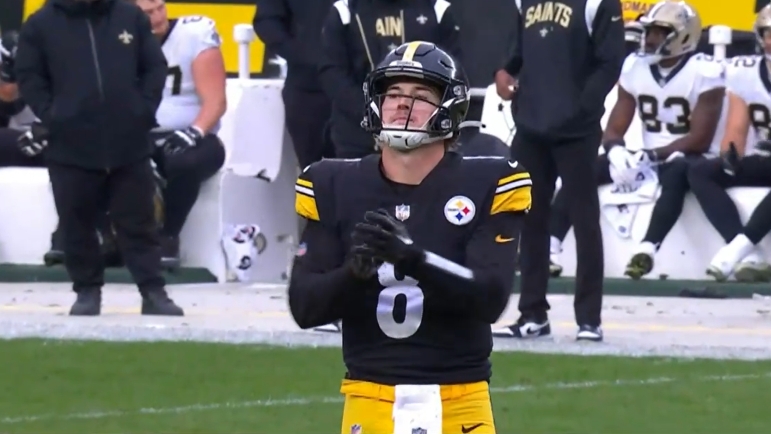 Kenny Pickett has started five games in his career, playing in six. That’s not a very substantial body of work, and you can reasonably expect his play and performance to evolve considerably over the course of his next many games for the Pittsburgh Steelers.

He did manage to start and finish his first game while winning in the process on Sunday against the New Orleans Saints, and while there were a couple of ugly throws or decisions mixed in, it was also one of the cleanest games he’s had so far from a decision-making standpoint. But not enough to satisfy the rookie quarterback

“It’s gonna continue to get better. I’m nowhere near where I want to be or where I need to be,” he said of his decision-making process up to this point via the team’s website. “It’s a day at a time. There’s definitely things that we liked that I’ve done that I can continue to improve on, and there’s things that I need to get a lot better at. It’s really knowing what those are, finding that out and then go attacking that.”

There are certain plays that we’ve talked about over the course of the past couple of days I could point to and submit for discussion, but frankly, the window for objective discussion rests narrowly between the factions who will make all excuses for Pickett and those who are already working on drafting another first-round quarterback in 2023.

One area that head coach Mike Tomlin brought up on Tuesday during his pre-game press conference was with respect to the pressure that he is taking—specifically the sacks. When asked if he shared some of the blame for that, he said, “sometimes Kenny gets Kenny in trouble”, chalking it up to the nature of being a young player.

There are many elements a quarterback has to balance, doing real-time risk assessment regarding whether to take a shot down the field, to settle for a checkdown, or to throw a ball away depending on what he’s seeing and his level of confidence in delivering the ball where it needs to be. Pickett talked about this formula and about the balancing act of knowing when to get rid of the ball.

“A little bit of both. But we want to take more shots too, right? So, I’ve got to hold the ball a little bit longer to let guys get down the field,” Pickett said. “But it’s also knowing when to get it out of my hands and get the ball down to the checkdown or utilize my legs. I feel like I did a good job at times with that and moving the chains and having one explosive that helped us out. It goes hand in hand with everything in the offense.”

Pickett did scramble successfully a handful of times during Sunday’s game, which adds another wrinkle to the equation. It’s not always about getting the ball out of your hands. Sometimes it’s about you becoming the playmaker, if that’s what the situation calls for. In that area, he’s certainly taking steps forward.