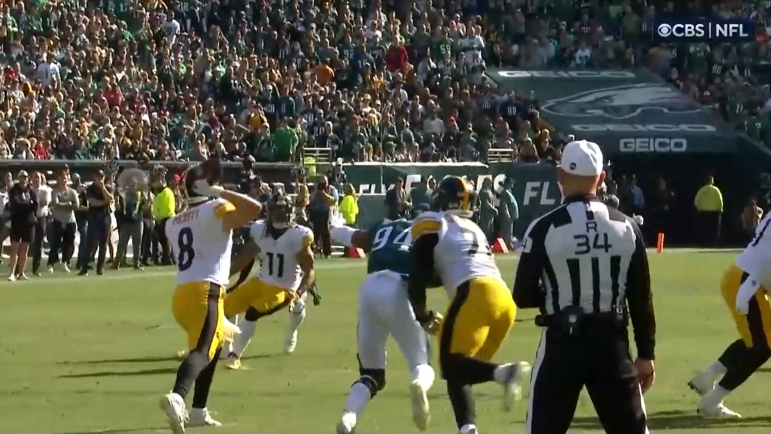 The Pittsburgh Steelers were going to get quarterback Kenny Pickett on the field sooner or later once they used their first-round draft pick on him. While head coach Mike Tomlin was quick to say that he would be in the running to start at the beginning of the year, it wasn’t until midway into week four that he got his first snaps.

The four and a half games that have come and gone since then have left a decent sampling of what the Pittsburgh product has had to offer thus far, and it has left a lot to be desired. But it’s unreasonable to expect that a player’s first 18 quarters of action will be representative of his next five seasons. You learn as you play, and that includes making fewer mistakes as you figure out how to avoid them. That’s where the Steelers are now with Pickett.

“I think that’ll be a testament to him if he continues to take mistakes off the table”, offensive coordinator Matt Canada said on Friday about his rookie quarterback via transcript. “What we’re looking for is for him to not make the same mistakes again. Obviously, as he evolves, and I think when you look at guys who’ve played a long time, that’s what occurs. So, hopefully he’ll do that”.

While there is room for debate when it comes to assigning blame on the eight interceptions he’s thrown on his first 165 pass attempts, there is surely a whole list of decisions the coaching staff has been going over with him these past two weeks.

Granted, he also has a list of great plays, great decisions, great throws, great poise under pressure. There has been a lot to like. But the mistakes have been costly. I think no fact better illustrates that than the fact that the team ranks 32nd in points scored per drive, but 17th and 19th, respectively, in drive length and plays per drive. The former has declined since Mitch Trubisky, the latter numbers improved. So they’re moving the ball more but not finishing. But they trust he’ll learn and adapt.

One can only hope. Even if more losses means better draft capital next year, poor play from Pickett would be an even worse sign for the future. There is no greater factor than quarterback play in a team’s success or failure, so you want to see something from under center that gives you confidence and hope for the future. Something that actually ends up in the right end zone.