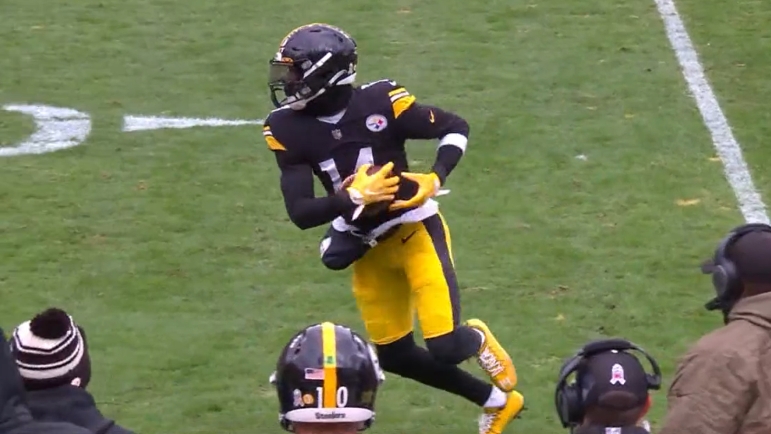 On Wednesday, QB Kenny Pickett spoke to the media after practice and talked about the team’s previous game against the New Orleans Saints and previewed their upcoming matchup against the Cincinnati Bengals.

When Pickett was asked about WR George Pickens being used on jet sweeps with Chase Claypool no longer with the team after getting traded to the Chicago Bears, Pickett mentioned that he knows Pickens has it within his skill set to be used in that role as the team finds more ways to get the ball in his hands.

“I think it’s just another way to give him the ball,” Pickett said about Pickens to the media Wednesday on video from Steelers.com. “We want to get him touches and he’s never really had that wing spot I don’t think on that. It was just we were in a personnel where we wanted to go tempo and he had to be that guy and I’m glad I was able to give it to him and he got in the end zone. I think next time hopefully he goes around the outside, he could walk in, but he wanted to get the touchdown quick, so it was good.”

Pickens got two carries on jet motion handoffs and gained 23 yards. One carry went for a long of 22 yards and the other occurred near the goal line for a one-yard TD plunge.

Not designed to go inside like that but George Pickens said he saw the opening and went YOLO. #Steelers #NFL pic.twitter.com/Gfd1zLO9lw

Pickett mentioned that Pickens was supposed to go around the outside rather than cut it up the middle on his TD which was the same sentiment made by Pickens after the game, but he understood Pickens seeing the end zone as he took the hand off and cut up inside to dive toward the goal line for the score.

Since Claypool got traded to Chicago, many expected Pickens’ role in the offense to increase with the vacated targets. Other players on the team have iterated the same sentiment including TE Pat Freiermuth who sees Pickens executing at a high level with an increased role in the offense.

Granted, I didn’t personally expect increased usage on jet sweeps to be part of the expanded role for Pickens who really diversified his route tree against the Saints. Still, Pickens showed he was capable and executed, ripping off a 20+ yard run and got into the end zone. Hopefully these are just a sign of things to come for the expanded usage of Pittsburgh’s talented rookie WR.

One of my favorite #Steelers plays from Sunday was this George Pickens run on a flip, which went for 22 yards.

Great design by Matt Canada to put defenders in conflict with a fake to Najee Harris. Also, sound blocks by Pat Freiermuth and Diontae Johnson to free a lane. pic.twitter.com/AFglcAvuJ1