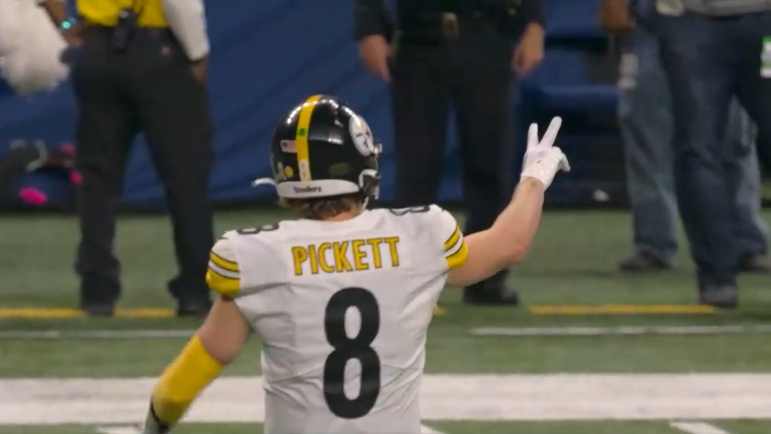 The Pittsburgh Steelers offense only scored eight points in the second half. That’s the glass half-empty view. They also scored the amount of points they needed and scored them when they were needed. Now it’s half full, even though we’re talking about the exact same thing.

The bottom line is we’re talking about a win, and it’s a win that marked rookie quarterback Kenny Pickett’s third of his career, with his first game-winning drive. After the defense squandered a 13-point halftime lead, he commanded the go-ahead 11-play, 75-yard drive to go up ahead, never relinquishing the advantage from that point forward.

His teammates and coaches talked up his ability to lead the offense as a young player. Center Mason Cole even highlighted the fact that he more or less called the play on the Benny Snell Jr. touchdown that proved to be the game-winning score, citing it as an example of what kind of leader he is. Pickett wasn’t so interested in framing his narrative in that regard, simply doing what he is supposed to do, which is get the job done.

“It’s reading the room. It’s just knowing what we need. I think everyone was dialed, everyone was locked in on what we had to do,” he said via the team site about his approach heading into that drive, saying he didn’t give any kind of pep talk or anything like that before they took the field.

“There’s no rah-rah speech that’s gonna go put the ball in the end zone,” he said. “You just kind of have that look about you and everybody else responds that way. It was business. It was an unbelievable drive.”

A first, as mentioned, perhaps of many? His predecessor, Ben Roethlisberger, retired with 53 career game-winning drives, tied for the third-most in NFL history behind only Tom Brady (55) and Peyton Manning (53), recording seven of them in 2021.

Needless to say, the ability to come back in games was a critical part of Roethlisberger’s and the Steelers’ game and something that made them great. You’re going to be playing from behind sometimes, so it’s imperative to have that ability.

Pickett failed his first test in that regard in a huge way earlier this year, throwing an interception on back-to-back potential game-winning drives. Not so last night. He was poised and in control, starting things off with a beautiful 13-yard connection with George Pickens on 3rd and 9 to keep that drive alive, as he was about to take a shot.

His 17-yard completion to Pat Freiermuth later on the drive was another chain mover on 3rd and 6 and put them in goal-to-go. Now, he was just off on a touch pass for a would-be touchdown to Pickens two plays later, but then, of course, he made the call on the next play that put the ball in the end zone.

And then he made that excellent extended-play completion to Pickens in the back of the end zone for the two-point conversion that gave the Steelers a seven-point lead. That’s playmaking. That’s getting the job done. No speeches, no rah-rah. Just results.