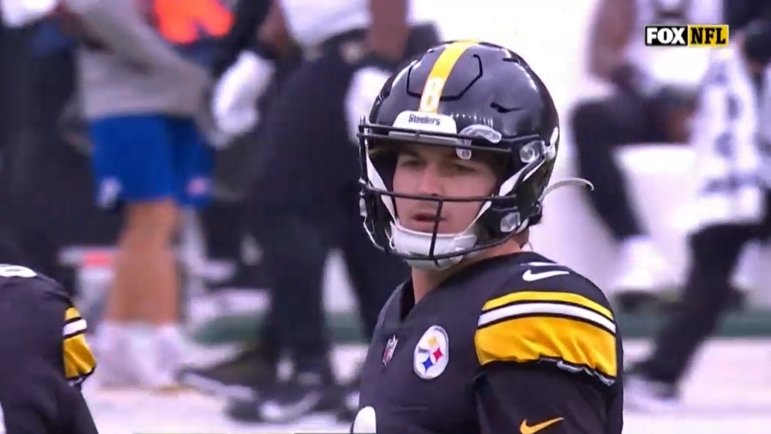 The Pittsburgh Steelers got back into the win column Sunday, beating the New Orleans Saints 20-10 to take them to 3-6 on the season. In a game where the offense ran for 217 yards with six players carrying the football on the contest, the passing game left those watching wanting more as QB Kenny Pickett threw for 199 yards, completing 18-of-30 pass attempts (60%) with no TDs and no INTs.

An impressive win for the Steelers rookie QB 🔥 pic.twitter.com/K2G5HFY36x

Coming into Sunday’s game, Picket has thrown only two TDs to eight INTs on the season. While those stats need context, he has struggled in the red zone in terms of finishing drives and has often been aggressive with the football, pushing the ball down the field into coverage, trusting his weapons to make a play.

When Pickett was asked if he had to battle his instincts and throw the ball away rather than taking a shot downfield, Pickett acknowledged that it’s in his nature to take shots but did a better job today taking what the Saints defense gave him.

“That’s what you’re battling,” Pickett said to the media Sunday after the game in a press conference which aired live from Steelers.com. “You’re a competitor. You want to make a play, but at the same time it’s got to be smart. So, you’re always balancing and you’re always fighting that urge to make a play. I felt like I did a good job today, taking what they gave me, Glad I hit the shot to Diontae [Johnson], but there’s more out there that we need to make. So, that’s something that we’re going to continue to work on.”

Today wasn’t Pickett’s best game as he missed several open receivers and got rattled at times in the pocket when he had time to stand in and make a throw. However, he managed to avoid the turnover bug that has bitten him in previous outings and protected the football well as the running game controlled the clock and the defense did their part in keeping New Orleans from getting on the scoreboard.

Ideally, you would like to see Pickett open up the passing game more and provide Pittsburgh with a well-rounded offense that presents opposing defenses with headaches of how to defend both the run and pass. However, for an offense that has struggled mightily so far this year, today was a step in the right direction for Pickett and the rest of the offense as they managed to avoid turning the football over and sustained drives to put points on the board.

Sunday’s game was a step in the right direction for Pickett who is learning on the fly in his rookie season. Hopefully more prolific passing days are to come, but in the meantime, cutting down on the turnovers and playing possession football was enough to help Pittsburgh come out with the win against the New Orleans Saints Sunday, getting this team back into the win column for the first time in over a month.