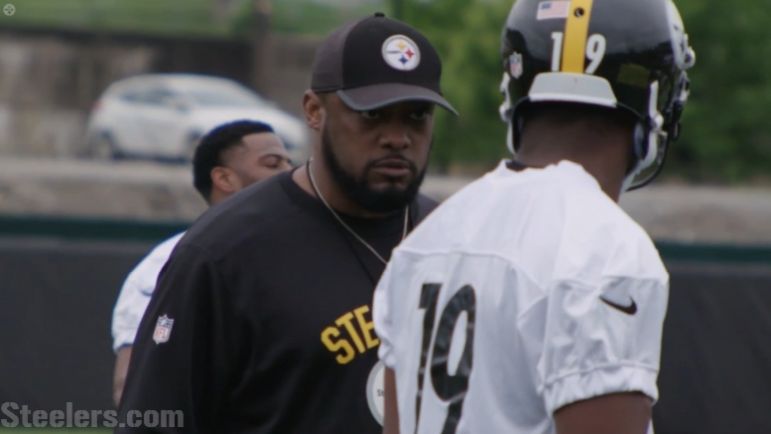 One of the Pittsburgh Steelers’ biggest offseason headlines was the departure of receiver JuJu Smith-Schuster to the Kansas City Chiefs. Drafted in the second round in 2017, Smith-Schuster had an incredible first two seasons with the team. However, this success did not last and it became evident that Smith-Schuster was not a good fit with the team’s offense.

In signing with the Chiefs, Smith-Schuster is now part of one of the most prolific offenses in the NFL. Led by offensive mastermind head coach Andy Reid and Super Bowl winning quarterback Patrick Mahomes, Smith-Schuster appears to have carved out the consistent and optimal role for his skill set that he could not find in Pittsburgh. When asked to compare his current head coach with Steelers’ head coach Mike Tomlin, the Chiefs’ receiver pointed out one key difference between the two on a Wednesday episode of Audiorama’s Block Forever.

Smith-Schuster is right in the fundamental difference between the two head coaches. After starting his coaching career as a receiver coach for the Virginia Military Institute in 1995, Tomlin assumed a role as the defensive backs coach for Arkansas State in 1998, and did not look back to the other side of the ball. Tomlin was a defensive backs coach for the 2002 Tampa Bay Buccaneers’ Super Bowl winning defense, where he served under head coach Jon Gruden. For context, this was a coaching staff that popularized the Tampa 2 defense, which teams utilize to this day to combat West Coast offenses.

On the other hand, Reid has been a head coach in the NFL since 1999, and primarily coached the offensive line beforehand. Before joining the Chiefs in 2013, Reid was the head coach of the Philadelphia Eagles from 1999 to 2012, where he was well-known for his offensive creativity. After drafting Mahomes in 2017, Reid has engineered one of the most creative and potent offenses in the NFL, which seemingly reignited the spark that Smith-Schuster had his first two seasons in the NFL.

In his rookie season, the former Steeler had 58 receptions for 917 yards and 7 touchdowns in fourteen games his rookie season. His second season was his career best by far, as he exploded for 111 receptions for 1,426 yards and 7 touchdowns as well as a Pro Bowl berth. After the departure of fellow receiver Antonio Brown, however, Smith-Schuster’s stats took a drop. From the 2019 injury to quarterback Ben Roethlisberger to the change in offensive coordinator, Smith-Schuster never looked the same after his Pro Bowl berth. That is, until signing with the Chiefs.

Don’t look now, but Smith-Schuster had a 100 yard outing both of his past two games with Mahomes against two solid defenses in the Buffalo Bills and the San Francisco 49ers. The former Steeler leads the Chiefs receiver room in yards and receptions, only trailing tight end Travis Kelce.

Smith-Schuster is arguably proving the biggest criticism against him wrong. That is, many argued that his success was contingent on Brown, and that he cannot be a top receiver for a team. As him and Mahomes continue to develop chemistry, look for the former Steeler to show the talent that made him a fan favorite back in 2018. Smith-Schuster  only signed a one-year deal with the Chiefs. While a reunion is highly unlikely, his love and embrace for Steelers Nation was never a secret, and crazier things have happened.