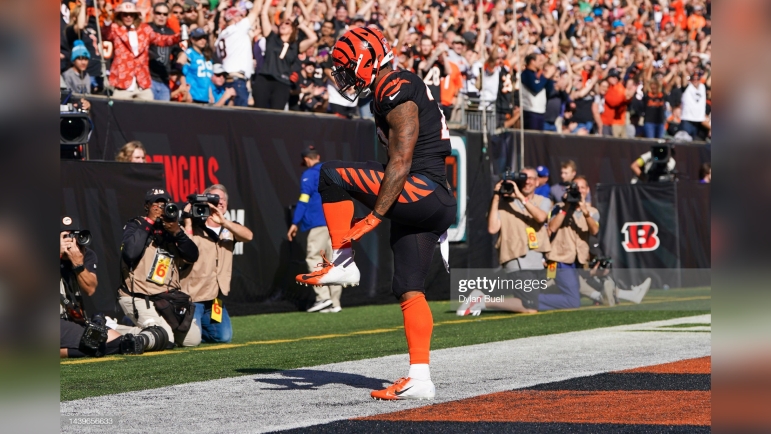 The Cincinnati Bengals dominated the Carolina Panthers yesterday. They rode the efforts of Pro Bowl running back Joe Mixon along the way. He scored four of the first five and five of the team’s six touchdowns on the day, riding out to a 35-0 halftime margin.

And in doing so he joined a relatively sparsely-populated club, becoming just the 17the player in NFL history to score at least five touchdowns in an NFL game. Nobody has done it more than once. The Indianapolis Colts’ Jonathan Taylor was the most recent player to hit five, doing so against the Buffalo Bills last year.

Mixon came one shy of tying the all-time NFL record of six, which was set by the Cleveland Browns’ Dub Jones in 1951, most famously tied by Gale Sayers in 1965, and finally matched for a second time just two years ago in 2020 by the New Orleans Saints’ Alvin Kamara.

Four of his touchdowns came on the ground, three of which were within three yards, his final score coming from 14 yards out. He also caught a 12-yard pass from quarterback Joe Burrow. Burrow scored the Bengals’ other touchdown from one yard out on the ground.

Outside of records, it marked an important win for Cincinnati as it endeavors to defend its AFC North crown. The Bengals advanced all the way to the Super Bowl last season and came within a minute of winning, but they have struggled to stay above .500 this year.

In fact, they have up to now only spent one week with a winning record since losing to the Pittsburgh Steelers in the season opener. They lost their first two games before winning four of the next five, a week seven win over the Atlanta Falcons making them 4-3.

After losing to the Browns last week, however, it took yesterday’s win over the Panthers to get them back over .500, now sitting at 5-4 on the season heading into their bye and one game behind in the loss column to the Baltimore Ravens, to whom they have already last this season.

The Bengals are actually 0-3 so far in divisional play, accounting for 75 percent of their losses to date, so it will be critical that they play well in the AFC North in the back half. Their first game coming out of the bye will be against the Steelers, who are coming out of their own bye this week.

And Pittsburgh will be supplemented by the return of star pass rusher T.J. Watt, who has missed the past eight games. They are, as you know, trying to just salvage something of this season after going 2-6 in the first half, and will hope to score a second consecutive win over the Bengals after losing three straight to them in order to get back on track.