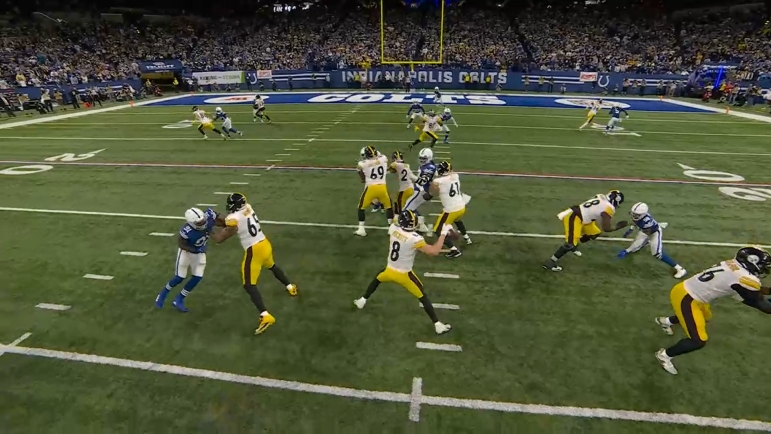 For as much as the offensive line of the Pittsburgh Steelers was criticized throughout training camp and the preseason while going through the growth and development process under first-year offensive line coach Pat Meyer, the praise hasn’t been there for how well the group has played throughout the 2022 season.

Granted, there are still some issues that remain, like second-year left tackle Dan Moore Jr.’s struggles in recent weeks with penalties and overall pass protection, not to mention the overall issues with the same penalties time and time again. However, based on where this group was in the summer to where it is now, it’s night and day difference, and it’s helping the Steelers move the football offensively and win some games here after the Week 9 bye week.

That’s in large part why rookie quarterback Kenny Pickett stood at the podium Monday night following a hard-fought win over the Indianapolis Colts in primetime, 24-17, and praised the big men in front of him in the trenches.

Against the Colts, the Steelers offensive line helped Pittsburgh rush for 172 yards and two touchdowns on 36 carries and allowed just three sacks and three quarterback hits on Pickett in 30+ drop backs. The run game was all the more impressive once second-year pro Najee Harris unfortunately exited with an injury right before the half that knocked him out of the game.

Already without backup running back Jaylen Warren and then down Harris, the Steelers offensive line never missed a beat in the run game, helping Benny Snell Jr. rush for 62 yards and the game-winning score on just 12 carries, while getting another 30 yards on six carries out of Anthony McFarland, who was elevated off of the practice squad Monday.

Speaking with reporters after the game, Pickett spoke highly of his offensive line.

Kenny Pickett on the win over Indianapolis ⬇️ pic.twitter.com/VdJGjTcckG

“Yeah, I mean, listen, we lean on those guys. We go the way those guys go. Our backs did a phenomenal job, the tight ends in the run game, so there’s a lot that goes into it, but that group we have up front, man, we’re pretty tight,” Pickett stated to reporters, according to video via the Steelers’ official YouTube page. “They’re real tight together, they have great continuity. It’s great to see, from early in the season what people were saying to now and how great those guys are playing.

“I’m incredibly proud to be those guys’ quarterback and play with them.”

Well, that will endear him even further to his offensive line.

Though they’ve had their fair share of struggles and given up some big hits to Pickett this season, the offense goes as the men in the trenches go. As long as there’s a semblance of a run game, second-year offensive coordinator Matt Canada’s scheme has a chance to work week to week.

Not only did QB Kenny Pickett deliver in the fourth quarter when his team fell behind, but he now has attempted 138 passes over the last 4 games and only thrown 1 interception. https://t.co/EfxuhR7ZTG

That was the case Monday night on the road against the Colts, and quite honestly should be the recipe for success moving forward. With a strong run game to lean on, Pickett wasn’t asked to do too much. He continues to avoid the turnovers and was well-protected throughout the game, even with the three sacks.

It only took some time to gel up front, like pretty much everyone said it would. Now, entering Week 13, the offensive line is pretty darn cohesive and is starting to find a consistent level of play — for the most part.