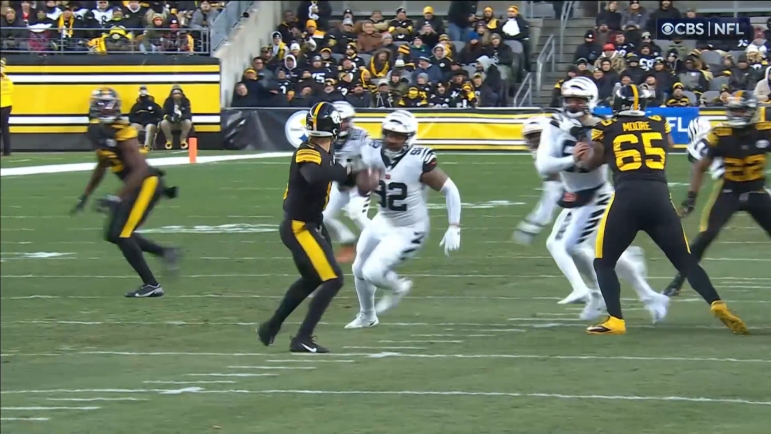 The Pittsburgh Steelers offense put up 30 points yesterday. They got into the end zone three times and they scored six times overall on 13 possessions. They only turned the ball over once, and that was on downs, showing better ball security than in the first half of the season.

Those are all good signs for rookie quarterback Kenny Pickett, yet it resulted in just another loss for the first-round pick. For his own part, he completed 25 of 42 pass attempts for 265 yards with one touchdown pass and a quarterback rating of 85.9. He should have had a late 49-yard touchdown pass to George Pickens, but the receiver dropped the ball (they score a touchdown on the drive anyway, on the ground, with 48 of the 49 yards coming through the air).

Each week has revealed plenty of positives in his performance, even if they have been uniformly flawed as one would expect for a rookie starter. Yet all the losing—he’s now 2-4 as the starter of record, and he didn’t complete the first win—has got to affect his confidence level, right? Not according to him.

“Listen, I’m gonna sling it ‘til the end,” he told reporters via the team’s website. “My confidence has not wavered. I’m extremely competitive and I hate to lose and it doesn’t feel good sitting up here after a loss, that’s for sure. We’ve got to get things cleaned up and get back on track this next week.”

You certainly don’t want your quarterback to be shaken and trepidatious out there. He needs to believe that he can execute the offense, drive them down the field, and win games. Even in a loss, putting up 30 points does help, especially when it’s the first time doing it.

That one did go to Pickens for 29 yards just after the two-minute warning in the second quarter. It also happened to be on 3rd and 9, and that tied the game at 17-17. All was going well. They even added a field goal just before the half to take the lead.

And then things didn’t go so well. The Bengals put up 20 points in the second half and the Steelers’ offense managed just three until the final minute when a very late touchdown pulled them to within seven, with under a minute to play and no timeouts.

Pickett does talk about slinging it, but there are definitely times that he’s not slinging it enough. Every week we see prominent instances where he passes on the opportunity to rip one down the field for a potential big play, perhaps gunshy after throwing eight interceptions already. He may be confident generally, but it doesn’t seem to be the case in all circumstances uniformly. In this and in the red zone, two crucial areas in which he needs to continue to grow.